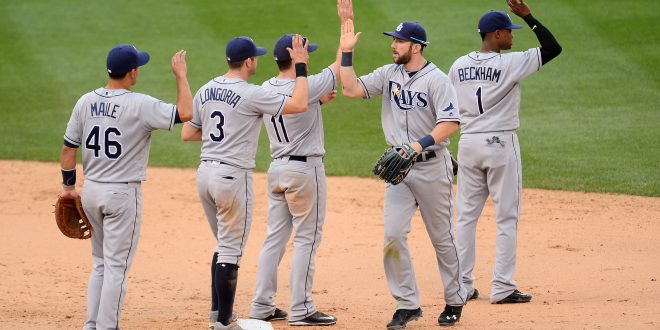 The Tampa Bay Rays are continuing their three-game winning streak. The Rays defeated the Oakland Athletics Thursday evening 7-3.  The Rays got this win despite having to change up some positional players. Rays first baseman Logan Morrison has been sidelined with an injured right forearm, but received an injection and is expected to be okay in a day or two and Steve Pearce needed a day off.

This then gave middle infielder, Tim Beckham, the opportunity to step up.  However, Beckham did not disappoint. He hit a homer in a four-run inning with his eighth straight hit over three games to get the win. He even tied a Rays record with those hits.

Beckham started his streak with a single in his final at-bat Monday and was retired when he popped out to end the sixth, but already added his effect to the game. His eight hits in eight at-bats was one more hit than he had in 41 at-bats in all of June.  Beckham says that just trusting himself and his team has allowed him to have the success.

That's a hit in 7 straight AB for Tim Beckham!#RaysUp, 2-0! pic.twitter.com/7Tjx3ZfYKd

Other players who helped contribute were Corey Dickerson, who homered and drove in three runs, Logan Forsythe, Brad Miller, and Evan Longoria added RBI hits in the fifth inning to back a solid start by Matt Moore (6-7).

Moore also allowed a three-run homer to the A’s Jake Smolinksi in the second but nothing in seven innings for him to gain his first win in eight road starts this season.

Alex Colome got three outs in the ninth to get his 21st save in as many chances.

Up next for the Rays is the Oakland A’s again.

Right handed pitcher Jake Odorizzi(4-5)  looks to take the mound for the Rays. He’s coming off of his sixth win after he only allowed the Baltimore Orioles just two runs in six innings for his first win in over a month.  Odorizzi is also one of the few pitchers who has been linked to pitching trade pool, as the August 1 non-waiver trade deadline approaches.

For the A’s left handed pitcher, Sean Manaea (3-5) faces the Rays for the first time in his career for the second game of the series. 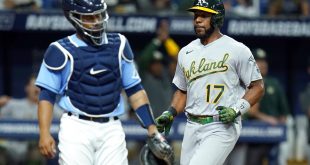 Tampa Bay Rays Struggle in Game 3 Against the A’s

After taking the series with a clean sweep against the Orioles, the Tampa Bay Rays …