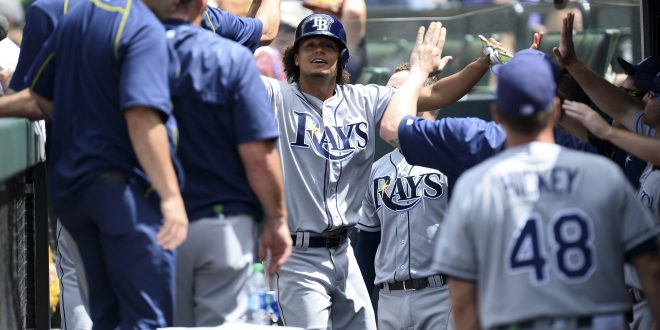 Despite improvement on the mound, the Tampa Bay Rays are still struggling. After losing 3-2 against the Los Angeles Dodgers last night, the Rays will look to snap a four-game losing streak that started on the West Coast and at least split the series as they take on the Dodgers again today.

In yesterday’s game, the Dodgers capitalized on two errors by the Rays defense to score two runs in the third inning. The Rays were shut out through the seventh inning, but managed to knock in two runs in the eighth. In the top of the eighth, Brad Miller hit an RBI double and a wild pitch from Dodgers’ Luis Avilán allowed Logan Forsythe to score but it wasn’t enough to get the win.

However there was one positive note from the game, as Chris Archer did well for the Rays. Rays manager Kevin Cash said the game against the Dodgers was one of Archer’s best starts.  In seven innings, the right-handed starter struck out eight. Archer feels that the Rays pitching has helped the Rays play better overall, but the team still comes up short. Even though he had a relatively good game, they still lost so he can’t look at it from a “personal standpoint.”

With the trade deadline approaching, lots of teams have shown interest in Archer. From the looks of things, Archer will remain with the Rays through the August 1 deadline, as team management is probably waiting until the winter to make some movement against the back drop of a weak free agent market. Other valuable Rays in the discussion are Matt Moore, Jake Odorizzi, and Drew Smyly. Either way, the Rays have a lot of heat for trading.

FWIW, Moore, Archer, Pearce other #Rays speculated upon in trade rumors all present in clubhouse this morning