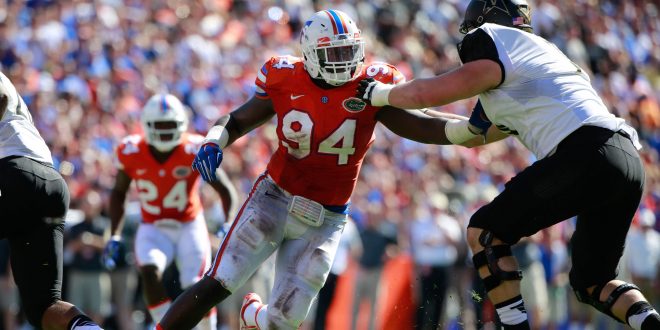 Last year, there were only four schools in the FBS who had more sacks than Florida (40). The tough news for the Gators heading into this year is knowing that nearly a third (13 to be exact) of the sack total left with Jonathan Bullard and Alex McAlister. Luckily, the Gator’s defensive line has the most depth of any other position heading into the 2016 season. Leading the charge on the front line is the lone senior of the group Bryan Cox.

In the last two seasons, Cox has shown that he is a consistent presence along the defensive line. Cox has started at least 10 games in each of the past two years, showing a good improvement from his sophomore to junior year. In 2014, Cox racked up 29 tackles, six tackles for loss, and four sacks. In 2015, those numbers improved to 45 tackles, 10.5 tackles for loss, and 3.5 sacks. His talent has already gained nation-wide attention for this upcoming season by being named on the Ted Hendricks Award watch list for best defensive lineman in the country.

The keys to success for the 2016 season will be put on the shoulders of returning upperclassman like Bryan Cox. With the team facing the three best running backs in the country in Leonard Fournette, Nick Chubb, and Dalvin Cook, the defensive line will play a pivotal role in how far the team will go this year.