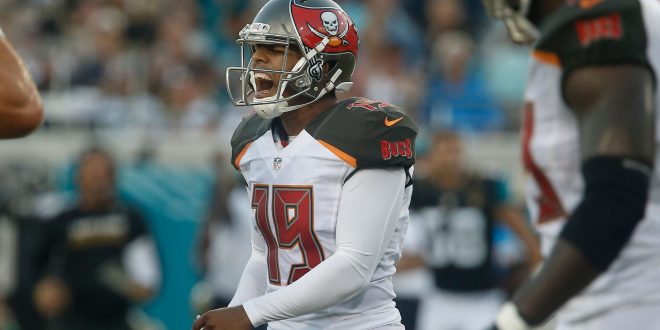 The Tampa Bay Buccaneers, 1-1 so far in the preseason, hosted the Cleveland Browns during their training camp today.

The Browns will provide a unique challenge to the Buccaneers because they’re the only team on the Buccaneers’ preseason schedule to play a 3-4 defense. Their style of defense is a big reason why head coach Dirk Koetter is excited to face them.

“Cleveland is a 3-4 defense and we’re going to see like eight 3-4 teams over the course of the year, so two extra days of working against a 3-4 are huge and then they’re a zone-read team on offense,” he said.

Speaking of defense, Tampa Bay’s defense has been performing very well thus far in the preseason. In two games, the Bucs’ defense leads the preseason in yards allowed per play, net passing yards allowed per play and yards per play on first down. Although the starting defense has been on the field for 40 of those snaps, these statistics are signs of encouragement. Rookie cornerback Vernon Hargreaves contributed to the team’s solid defensive effort with his two-interception performance last Saturday against the Jacksonville Jaguars. His performance was enough to earn himself some work with the first-team players on the practice field.

Tight end Austin Seferian-Jenkins has been impressive in training camp. Ever since being named as the number two tight end on the Bucs’ depth chart behind Cameron Brate, Seferian-Jenkins has turned a corner and solidified that by leading the Bucs in receptions against the Jaguars.

“I’ve just been doing what I’m supposed to be doing since I got here in training camp,” Seferian-Jenkins said.

Since the Bucs' first depth chart was released, TE @Aesj88 has been impressive.

One Buccaneer who has been struggling is kicker Roberto Aguayo. The former Florida State standout was selected in the second round of the 2016 NFL Draft. So far in the preseason, Aguayo is 3/5 on field goals. During training camp today, he was 3-for-6 on field goals. Coach Koetter sounded less-than-pleased when talking about his kicker.

One Buccaneer—and former Gator—who has been playing exceptionally well is Vernon Hargreaves III. He had two picks against the Jaguars over the weekend and apparently picked of RGIII twice when the Browns came to town for 7-on-7s.

The Buccaneers and Browns will play each other this Friday at 8 p.m. in Tampa, Florida.