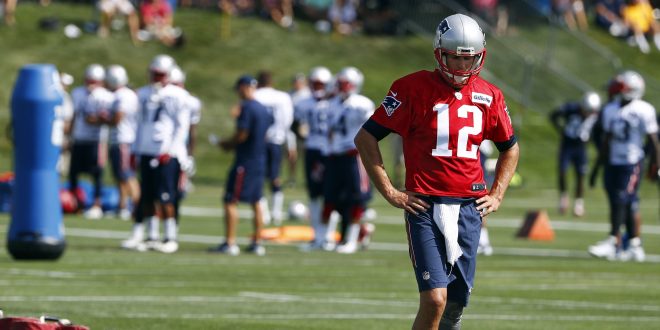 New England Patriots quarterback,Tom Brady has had a different experience this year during the offseason and into the preseason schedule.

Back in July, he decided to stop legal action against his four-game suspension, that will start at the beginning of the regular season. Knowing that they would not be able to use their 11-time Pro Bowl quarterback has led the Patriots to rely on Jimmy Garoppolo—their third round pick of the 2014 draft—to take the reins of the offense. Both Brady and Garoppolo have taken snaps with the first team during training camp in preparation for the upcoming season.

Brady also had an accident with some scissors last week that kept him from playing against the Bears. Then, after missing practices and returning to the team on Tuesday he explained his excused personal absence by telling reporters he “had to take care of something.”

So far, Brady has not played one down in either preseason game New England has played, but he said he will be ready when his number is called.

Despite his unorthodox off season, he says he is excited to get back to playing. After he missed the game against Chicago he said that he was disappointed that he did not get the chance to play because he feels that it is his responsibility to be out on the field with his teammates.

With two preseason games left, Brady will most likely get his shot to play before his suspension starts. Their next game will be on the road against the Carolina Panthers this Friday night. Head coach Bill Belichick has not told Brady whether or not he will get playing time, but expect him to treat the preseason like any other game.

One thing has been almost certain—that Brady will be the starting quarterback for the Patriots come Week 5 against the Cleveland Browns.