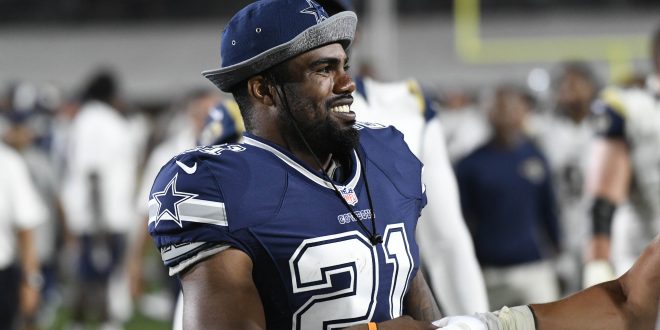 With NFL kickoff only 27 days away, the Dallas Cowboys only have two more games before they take on the New York Giants in their regular season opener. So far in the preseason, Dallas lost a close game against the Los Angeles Rams but crushed the Miami Dolphins 41-14. Next they head out to Seattle where they will match up with the Seahawks on Thursday for what is known as the “dress rehearsal.”

Perhaps the player Cowboy fans are most excited to see play is 2016 is fourth overall NFL Draft selection Ezekiel Elliott. The rookie running back from Ohio State has been out recently with a sore hamstring. Since he has only been able to practice for the last week, Cowboys head Coach Jason Garrett has tailored his plans for Elliott’s debut.

“What we try to do with the players who are playing in their first game is we have eight, 10, 12 plays – sometimes we go 15-to-20 plays with guys. So we’ll have a plan for him, we’ll talk about that over the next couple days”, said Garrett.

Unfortunately for the Cowboys, what they’ve gained in rookie talent they may have lost in starter talent for Thursday. Wide receiver Dez Bryant collided with safety Barry Church during Monday’s practice and has a concussion, according to coach Garrett. Bryant is one of the key players for the Cowboys, making 31 catches for 401 yards and three touchdowns for the 2015 season even with foot, hamstring and ankle injuries. Also out for Thursday are veterans Tyron Smith, Tyrone Crawford and Orlando Scandrick.

The Dallas Cowboys will play their preseason “dress rehearsal” against the Seattle Seahawks this Thursday at 10 p.m. at CenturyLink Field.

Previous Tom Brady is Ready to Play Again
Next Fernandez, Marlins Look to Make a Comeback vs. Royals