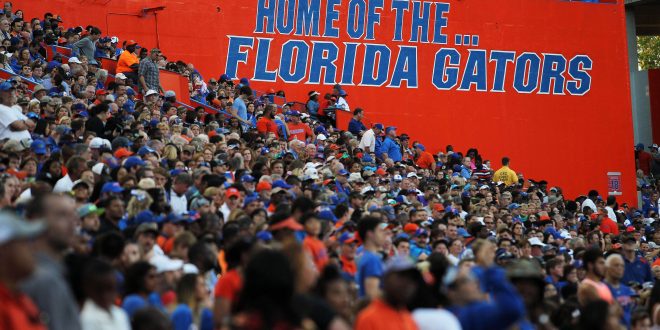 College football is finally making it’s return to the Swamp. Just in case you haven’t been keeping count, it has been 244 days since the Florida Gators played their last football game on New Year’s Day. Coach Jim McElwain and the team have the opportunity to start the season on the right foot against the Minutemen of UMass.

The 2015 season was filled with promise and disappointment. The Gators had a 10-2 regular season record, but the team failed to capture the SEC Championship or win their bowl game. The Gators have also had recent trouble with suspensions and injuries. The 2016 calendar year began with the suspension of quarterback Treon Harris and star wide receiver Antonio Callaway for violating team rules. During the summer, two freshman were suspended for firing BB guns in a dorm on campus. Most recently, star cornerback ‘Teez’ Tabor and tight end C’yontai Lewis were suspended for fighting during practice. Coach McElwain talked about the different injuries facing the team leading up the season opener. The depleted Gators will only have six wide receivers—who are on scholarship—available for the game Saturday night.

The recent struggles with the team will put more emphasis on starting quarterback Luke Del Rio. All eyes will be glued on the transfer quarterback as the school looks for it’s first true leader under center since Tim Tebow. The bright spot for the team entering the game will be the defense. Even with Tabor suspended for the game, the team should have no problem shutting down UMass. Last year, the Gators sported the eighth best defense in the country in yards allowed per game. Tomorrow’s game should be nothing more than a preseason game for the Gators, if all goes according to plan, before the team faces Kentucky next week.

For UMass, the 2016 season is a chance to gain some traction in the FBS. UMass made the switch from FCS to FBS in 2012. Since then, UMass has been apart of the Mid-Atlantic Conference. . . 2016 is their first season as an Independent. Since joining the FBS, UMass has accrued an 8-40 overall record. Despite the rough transition, UMass has chance to improve as a program with their young talent. Along with the Gators, the Minutemen have only 13 seniors on roster—which is the fourth fewest in the country. The young superstar for the Minutemen is sophomore running back, Marquis Young. As a true freshman, Young ran for 96o yards including a 103 yard game against Notre Dame.

For head coach Mark Whipple, playing against a team like Florida provides them with a sense of urgency. When asked about how the Minutemen can pull off an upset, Whipple emphasized that the team needs to focus on winning in the special teams battle and playing well in the red zone. Regardless of the outcome, UMass has to become familiar with SEC teams. This season alone they will play three SEC teams. . . they will also play South Carolina and Mississippi State.

Both teams are looking for a change in course for 2016 and beyond. One team is looking to escape mediocrity while the other tries to regains it’s national dominance. All will be settled on the gridiron, and another exciting season football has begun.