Home / College Football / A Night To Remember For Steve Spurrier 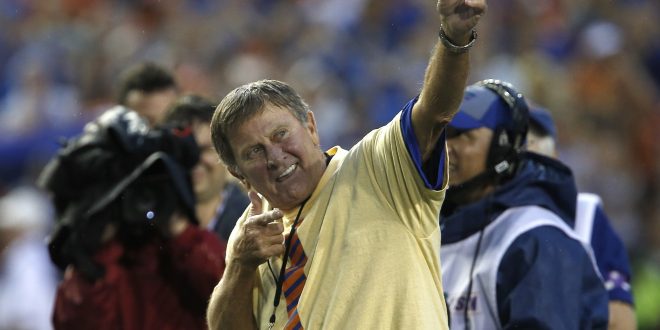 A Night To Remember For Steve Spurrier

GAINESVILLE, Fla.—The Florida Gator football team entered The Swamp last night to reintroduce themselves to their fans after a busy off season and successful fall camp. The season-opener allows fans and spectators to see the new and improved game-plan and if this team has what it takes to make it into the post-season. On the player side, it gives them the opportunity to showcase their skills they worked countless hours on to improve their performance. Ultimately, everyone wants to see who is going to show up and bring the energy into the stadium.

Last night, it wasn’t a player that started that spark of energy—at least it wasn’t a current player.

Steve Spurrier made his way to the 50-yard line in a style like only he can. The Saturday Night Lights shined bright through a light Gainesville rain, but that didn’t stop 88,121 people from standing on their feet and giving a chilling applause to the man of the hour—the man who put Florida football and the Swamp on the college football map. Back in 1966, Spurrier became Florida’s first Heisman Trophy winner and two-time All-American quarterback. Fast forward time, Spurrier had the opportunity to coach his alma mater. As if he didn’t win over the hearts of Florida fans back in 1966, during his time as coach, he earned a spot in their hearts forever as the one and only Head Ball Coach. By the time 1996 rolls around, Spurrier and his Gators bring home the program’s first national title. But that doesn’t take away the six Southeastern Conference titles he led the program to—oh, and the only five games he and Florida lost at Ben Hill Griffin Stadium over a 12-year span. This time period seemed like the icing on the cake, but little did Gator fans know… this Spurrier  thing was just getting started. Jump back into present day 2016—50 years since his Heisman Trophy and 20 years since the program’s first national title.

September 3rd, 2016 Steve Spurrier still knows how to send chills up Gator fans’ spines, make The Swamp roar, and make history in Gainesville. On this day, it became official that the University of Florida is not only the home of the Gators, but of the legacy that is Steve Spurrier.

The 25th-ranked Florida Gators were ready to charge the field to face Massachusetts, but they weren’t doing so before the university revealed Spurrier’s name up above. The Head Ball Coach gave a heartfelt and humbling speech to the Gator crowd, a moment full of energy, but a different kind of energy—he wasn’t jumping around and yelling like he was as the honorary Mr. Two Bits minutes earlier.

Spurrier reminisces on his favorite moment of the night.

The man of the hour brought a few people along to help him celebrate this occasion. The 1996 National Championship team graced their coach on the field—he wanted to share that moment with the team to first ever do it for the Florida Gator Football program.

Heisman Trophy winner —1966. The Head Ball Coach with the program’s first national title—1996. The ambassador and consultant for the University of Florida Athletics—2016. What’s next? Stick around to find out because the name “Spurrier” is here to stay.

A senior at the University of Florida reporting on Gator sports, local Gainesville and surrounding area sports, and telling the stories of local athletes. Born and raised in Gainesville, Florida with a passion for telling people's stories and having fun doing it.
@SportsDarwinism
Previous Preview: Arkansas vs. Louisiana Tech
Next Florida Football Outlasts UMass in Season Opener