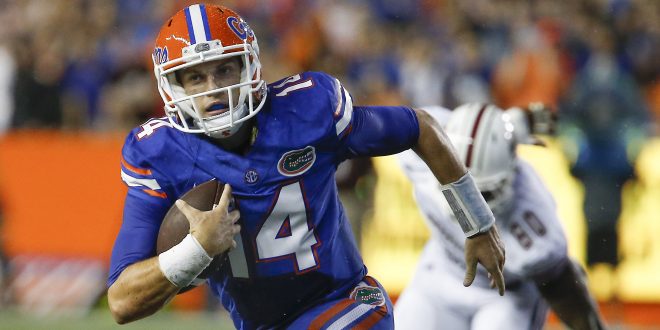 Even though his first start with the Gators ended with a win, Gator Quarterback Luke Del Rio sees that there is room for growth.

For Del Rio, it is his throwing that he felt really needed improvement following the Gator’s season opener against the Massachusetts Minutemen.

The Gators defeated the Minutemen Saturday evening 24-7, with 14 of those 24 points coming in the fourth quarter. In his first start, Del Rio connected with one of his teammates 29 out of the 44 times he threw the ball, recording for 256 passing yards. Antonio Callaway caught eight of those throws, with Brandon Powell catching seven. Del Rio’s longest throw came in the fourth quarter, when Powell caught a 26-yard sideline pass that resulted in a touchdown, with 8:05 left in the game.

Throwing wasn’t Del Rio’s only contribution to the game Saturday night. Del Rio ran for 21 yards of his own. He was third in rushing leaders for his team Saturday night, behind Jordan Scarlett’s 70 yards and Mark Thompson’s 22.

When it comes to being able to carry the ball, Luke Del Rio credits the offensive line for making those carries possible.

Del Rio left the field with 256 passing yards of his own, two of the three Gator touchdowns, and was sacked only one time. Still, though, the Redshirt Sophomore quarterback is looking to improve, both for himself and with the team.

For Head Gators Coach Jim McElwain, it’s the amount of time Del Rio spends with the ball that the quarterback needs to work on.

The Gators open up SEC-play this Saturday afternoon with a game against their long-time rival, the Kentucky Wildcats, who are coming off a 44-35 loss to Southern Mississippi in their first game of the season. Last time the two teams met in the Swamp, the Gators pulled of a 36-30 triple overtime win two seasons ago.

With Saturday afternoon’s game, Del Rio and the Gators are looking to leave the field with a win and extend their 29-game winning streak over Kentucky to 30.

As the season goes on, Luke Del Rio and the Gators will be met with some pretty tough match-ups. The Gators will meet SEC rivals, LSU, Missouri, South Carolina, and Vanderbilt all in The Swamp this season, with the exception of Vanderbilt’s game played in Tennessee and Georgia in Jacksonville. The Gators don’t have their BYE week until October 22, the weekend after they play Missouri and the weekend before the Florida-Georgia game, which means that they’ll play more than half of their games by then. Del Rio doesn’t seem to be too concerned, though.

He knows as long as he and his team work together—no matter the limited amount of time they’ll have for practices between each game—the growth he is looking for will be reached. 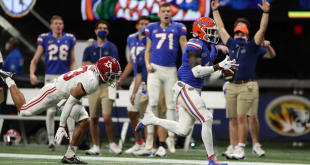