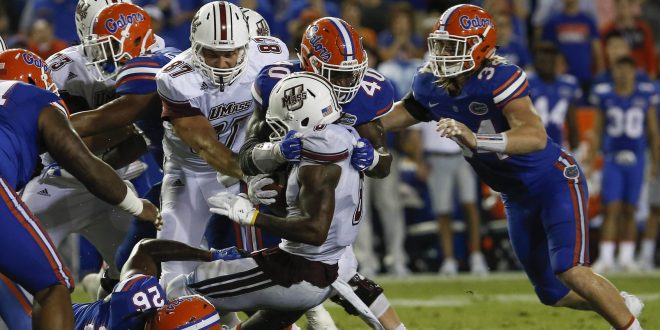 Share
The Florida Gators came away from a scrappy game against the UMass Minuteman, last Saturday winning 24-7. The game was a lot closer than many expected and caused the Gators to fall out of the AP Top 25.  Though, the defense showed it was ready to play, smothering the Minuteman offense, allowing only 187 total offensive yards, with 141 yards through the air and 46 yards on the ground. With these stats, it places the Gator’s defense as tenth in rushing defense and fourteenth in total defense in the nation.
Linebacker Jarrad Davis, arguably the leader of the Gators defense, racked up a total of nine tackles and .5 sacks against the Minuteman.  With high expectations to fulfill this season, Davis was listed on the watch lists for the Lombardi Award, First Team All-SEC, Butkus Award, and Wuerffel Trophy.

The Gators will be playing the Kentucky Wildcats this weekend in their SEC Opener and have not lost to Kentucky in over twenty-nine years,  the longest active winning streak in the nation. Davis ignores the streak taking it one game at a time.  The defense will return All-SEC cornerback Jalen Tabor, after missing the season opener due to a suspension.  Davis is excited about Tabor’s return and trusts Tabor’s ability to play defense.  The defense needs to improve on limiting unnecessary penalties by keeping their composure this weekend, according to Davis.  The Gator defense totaled 55 yards on five penalties, with three roughing the passers and two offside calls.

Davis believes they are playing a better team this week and will need to prepare mentally for this game.  Florida will look to extend the streak, playing host to Kentucky this weekend on their way to building on this season’s momentum with their first SEC win. Davis will lead the Gator defense this Saturday in hopes of proving they are just as elite against stronger competition.  The game is set to air on CBS at 3:30 p.m.
Share