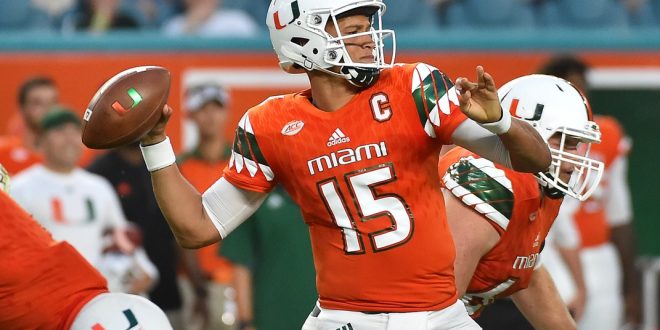 Hurricanes Back In AP Top 25 Poll, Play FAU Next

One week. That’s all it took for Mark Richt to bring the Miami Hurricanes football program back into the spotlight of the AP Top 25. Miami slid into the 25th spot, a slot previously held by the Florida Gators (UF fell from its ranking despite a week 1 win over UMass). Starting quarterback Brad Kaaya says he could hardly believe it.

Canes come in at No. 25 in the @AP_Top25 with a lot more football to go. #ItsAllAboutTheU pic.twitter.com/TvbCDO1qRP

And for good reason. The Canes haven’t cracked the AP Top 25 since November of 2013 (same with the Texas Longhorns). “Royals” by Lorde was atop the charts and “Thor: The Dark World” brought in $36.5 million in a single weekend. 61 different teams have appeared in the AP Top 25 in that time span.

The Canes blasted the Florida A&M Rattlers in a 70-3 debut for new coach Mark Richt. One more touchdown is all the guys in orange jerseys needed to tie the school record for points scored in a single game (77 vs. Savannah State in 2013). New look Miami drew just over 60,000 fans to the freshly renovated Hard Rock Stadium.

Kaaya celebrated his 21st birthday by tossing four touchdowns on the day — leading an offense that exploded for 523 yards. The bulk of the work came on the ground as three Miami running backs hit the century mark, and the Canes rushing attack racked up 373 yards.

But with the likes of Florida State, North Carolina and Notre Dame on their schedule, Kaaya says he is fully aware of the bumps in the road ahead.

Miami seemed nice and cozy in Hard Rock stadium. They’ll try building on that momentum against South Florida rival, Florida Atlantic, this Saturday. The Owls are coming off a narrow 38-30 victory over Southern Illinois in Week 1. 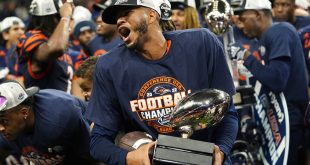