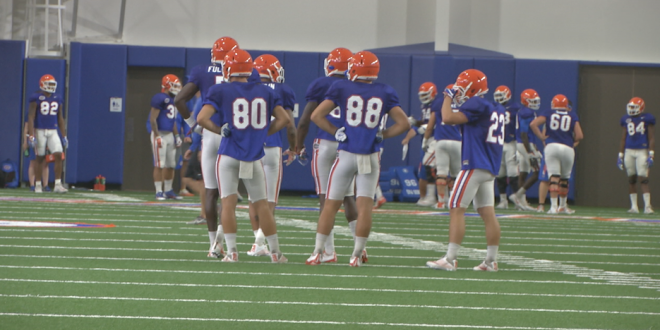 The Gators welcome in the Kentucky Wildcats on Saturday afternoon to kick-off SEC play. Florida has out-shined Kentucky dating back to the year 1987—making it the longest win streak in Southeastern Conference history.

However, the only history the Gators seemed to be focused on is last week’s game history and what they need to improve on this week to be prepared for the incoming Wildcats.

Florida outlasted UMass in their season opener and Kentucky was majorly upset by Southern Mississippi. Both teams have some work to do, but Kentucky could enter the Swamp with a chip on it’s shoulder. With Florida’s recent victory, along came praises from head coach Jim McElwain about redshirt sophomore defensive tackle, Khairi Clark. After Tuesday’s practice it was made known that McElwain was very pleased with Clark’s efforts despite him finishing off with only one tackle against the UMass offense—being effective and contributing away from the ball carrier.

The six-foot-two 328-pounder spoke to the media after practice and he emphasized that his offseason efforts to lose weight have paid off on the field. Hear what else Clark had to say about the defensive preparing for Kentucky’s offense.

While looking ahead to Saturday’s matchup, the Gators are also looking at a different depth chart for the new opponent. Changes have occurred with receiver Dre Massey out for the season because of a knee injury that took place against UMass. Since Massey won’t be able to perform, Brandon Powell moves up in as the top slot receiver and freshman Freddie Swain is listed right behind Powell. Florida fans will see the return of previously suspended tight end C’yontai Lewis and cornerback Teez Tabor. Listen to what Quincy Wilson has to say about the return of Tabor and how the defense is scouting Kentucky.

Florida takes on Kentucky on Saturday at 3:30 p.m.

A senior at the University of Florida reporting on Gator sports, local Gainesville and surrounding area sports, and telling the stories of local athletes. Born and raised in Gainesville, Florida with a passion for telling people's stories and having fun doing it.
@SportsDarwinism
Previous Jarrad Davis Views Reflects on UMass Victory
Next Hurricanes Back In AP Top 25 Poll, Play FAU Next