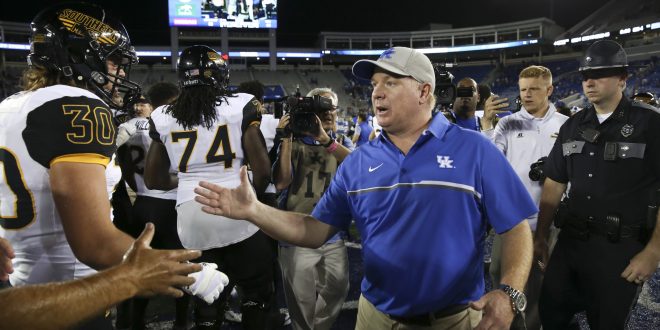 After suffering a brutal 44-35 loss in their season opener to Southern Mississippi in Lexington last week, the Kentucky Wildcats open up their SEC schedule on Saturday against the Florida Gators at Ben Hill Griffin Stadium. Despite trailing 35-10 towards the end of the second quarter, Southern Miss scored 34 unanswered points to end the game and upset Big Blue Nation.

Go Behind The Scenes of our 44 – 35 Win Over The Kentucky Wildcats In Episode 1 of #RISE pic.twitter.com/u3kXF3p3q2

The Gators are a much better opponent than the Golden Eagles, and Head Coach Mark Stoops knows that much. Stoops praised the Gators’ team and head coach Jim McElwain during his weekly SEC teleconference call. He also made sure to note how hot it’ll be during the game’s 3:30 p.m. start time at The Swamp. Stoops also mentioned how his team fell apart in the second half, and can’t have a repeat performance against Florida.

The Wildcats gave up 520 total yards in their opener against Southern Miss, a number that cannot be repeated during the team’s SEC schedule. Coach Stoops talked up the Gators’ balanced offense, outside weapons and efficient running game.  Florida will not only look to open up their SEC schedule with a win, but continue their current 29-game win streak vs. Kentucky. The streak is the longest active one in the FBS, but Coach Stoops says he won’t let it affect his team in any way.

The Wildcats played 95 snaps last week, playing their starters in many more than they deemed necessary at the start of the week. Coach Stoops says he played his starters last week in too many snaps and hopes there’ll be much less this game. Despite the many factors coming into this game, the former Florida State defensive coordinator says that they’ll take a win in any fashion possible.

Kentucky-Florida kicks off on Saturday, September 10 at 3:30 p.m. and can be seen on CBS. Gary Danielson will remain on the call, but former ESPN play-by-play man Brad Nessler will be taking over for Verne Lundquist after 17 long and strong years broadcasting the SEC on CBS. The game can be heard as always on the Gator IMG Sports Network with Mick Hubert, Lee McGriff and Brady Ackerman on the call.

It's a homecoming for our 15 Florida Boys! #WeAreUK #BBN pic.twitter.com/Lc1GhvS5H1