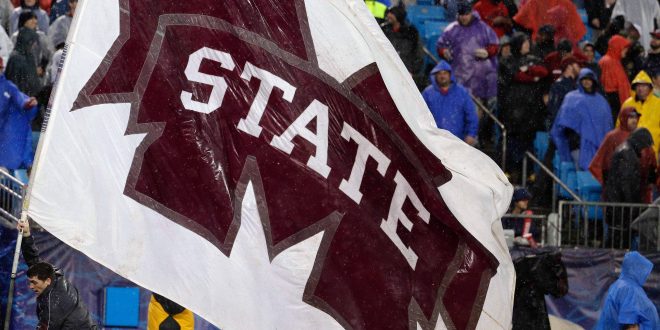 Dec 30, 2015; Charlotte, NC, USA; The Mississippi State Bulldogs flag is waved in the endzone after a score in the second quarter against the North Carolina State Wolfpack in the 2015 Belk Bowl at Bank of America Stadium. Mandatory Credit: Jeremy Brevard-USA TODAY Sports

The first week of college football has come and gone and has left many fans at a loss for words.

The Bulldogs went into Saturday”s game without freshmen defensive end Jeffery Simmons because of suspension. Head Coach Dan Mullen said that Simmons could play in Saturday’s game against South Carolina.

The defense could have more than likely used Simmons to help avoid South Alabama’s touch down to take the lead with 57 seconds left in the game. In addition, South Alabama’s quarterback had more success than the Bulldogs would have liked, completing  24 passes for 285 yards.

Beginning their season against an SEC team, the Gamecocks were able to secure a close win over Vanderbilt last weekend. Despite this being Muschamp’s first season, the Gamecocks have history on their side as they have won the last seven meetings against the Bulldogs.

In the end, both teams success or failure last week was determined by field goals late in the game: Mississippi State kicker Westin Graves missed a 28-yard field goal resulting in a loss and South Carolina kicker Elliot Fry made a 55-yard field goal for the win.  Last week’s results may be foreshadowing Saturday’s match up being decided by a field goal for either team.