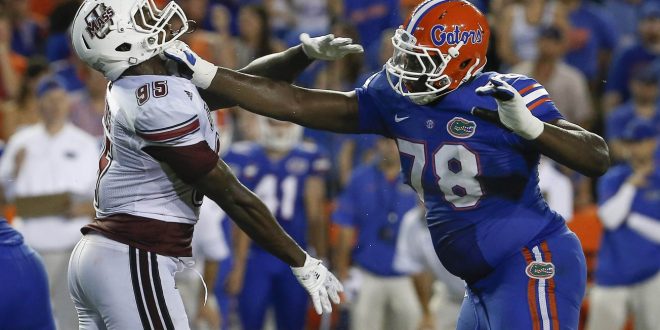 Last season, injuries forced Florida to stick inexperienced players in the offensive line and often times the team suffered. The team allowed a whopping 46 sacks and with such a porous O-line, the running game was ineffective, averaging a paltry 126 rushing yards per game, 112th overall in FBS.

This season, the script has been flipped. In only two games the O-line has been one of many positives of a 2-0 Gator team that just finished not only blowing out Kentucky on offense, but limiting the Wildcats to seven points. Offensive line coach Mike Summers said the improvement from Week One against UMass to Week Two was very noticeable.

Key to the offensive line’s early success is freshman Jawaan Taylor. Summers was not short on praise for the 6-foot-5, 330-pound right tackle, saying he not only has the rare talent of having “natural punch”, but is a serious candidate to start against North Texas on Saturday. Pro Football Focus, who has a team of analysts that grade every snap and grade players individually from game result, rated Taylor as the best performer in the Kentucky win with an 84.5 mark in his 73 snaps, above-average by their standards. Fellow lineman and center Cameron Dillard scored second-highest at 80.7. Not surprisingly, the offense flourished, scoring 564 yards of offense, the most against an SEC opponent since 2001.

Quarterback Luke Del Rio said he wasn’t even touched and he owed his performance to the O-line. Indeed, he wasn’t sacked once and saw only four QB pressures (sacks, hurries and/hurries). In addition, Pro Football Focus details that when the Wildcats used the blitz, Del Rio was 8-for-10 with 176 yards and two touchdowns.

Amidst the growth of the line, Head Coach Jim McElwain mentioned that more linemen would see opportunity against North Texas after right guard Tyler Jordan went down with an injury. According to SEC Country, Jordan is having surgery on Friday to remove a cyst from behind his eye that is affecting his vision. He should be able to return to conditioning in seven days and to game action shortly afterwards. McElwain said that redshirt freshman Richerd Desir-Jones will get his first career start in Jordan’s absence, and sophomore Frederick Johnson can also play guard, opening up time for Taylor to continue seeing game action.

Summers said that maintaining a positive energy vibe in the O-line, especially among this young group, is key to not only winning, but ensuring that mistakes don’t affect your on-field performance. These things are crucial to making sure the matchup against the Mean Green doesn’t become a “trap game”, something McElwain notes has been an issue for the program in the past. North Texas is 1-46 all-time against ranked teams.