Both teams came into this match up without a win under their belt. It was tit for tat between these two teams most of the night.  Both had a total of eight points, by the end of the first quarter, since they both went for the two-point conversion after scoring a touchdown—both teams were eager for that first victory.

It was a balanced match up, but in the end, the Wolves grabbed the win they have been looking for.

UP NEXT: St. Francis will have next week off, but will face Oak Hall on September 30th. St. John’s Country Day will go up against Florida School for the Deaf next week.

A senior at the University of Florida reporting on Gator sports, local Gainesville and surrounding area sports, and telling the stories of local athletes. Born and raised in Gainesville, Florida with a passion for telling people's stories and having fun doing it.
@SportsDarwinism
Previous Preview: Georgia Roll On To Missouri
Next High School Football: Buchholz Rallies In Fourth Quarter Defeating Oakleaf, 10-7 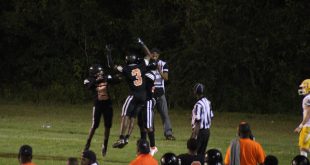