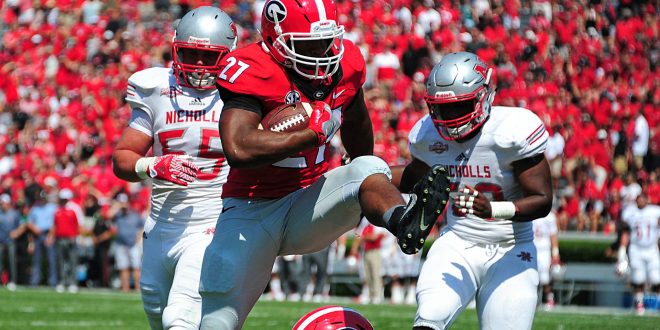 Preview: Georgia Roll On To Missouri

The Missouri Tigers are hosting the Georgia Bulldogs in a SEC East matchup this Saturday night.

Mizzou is 1-1 after beating Eastern Michigan 61-21 last Saturday. The Tigers offense exploded for 61 points and a bulk of the scoring came from the passing game.

Missouri Tigers head coach Barry Odom says the quarterbacks have put in a lot of work in order to improve the passing game. Their hard work paid off so far, wth Missouri sophomore quarterback Drew Lock throwing for 450 yards and five touchdowns against Eastern Michigan.

They will now get arguably their biggest test in this young season, when they face the Georgia Bulldogs. Odom says Georgia has a good secondary and he expects them to make plays. However, he wants them to stay focused on each current snap.

Mizzou will also have to pass protect and do their homework against Georgia’s pass rush to keep a clean pocket for their quarterback in order to keep the passing game strong.

The Georgia Bulldogs, meanwhile, will come into Columbia, Missouri with a 2-0 record. The Bulldogs gained their victories by beating North Carolina and Nicholls State.

The Bulldogs possess one of the most dangerous running backs in the country in Nick Chubb. Chubb ranks fifth in the nation with 151.0 rushing yards per game.

The Mizzou Tigers defense will have to improve if they want to put a stop to Nick Chubb. Odom said the defense got off to a slow start last year, and they improved as the year went on. He believes they’ll do the same this season.

The Tigers coaching staff has not overlooked the pair of Bulldog quarterbacks: Grayson Lambert and Jacob Eason. They both can give Mizzou a tough time if all the focus remains on Nick Chubb.

Kickoff for this matchup will be at 7:30 p.m. and can be seen on the SEC Network.