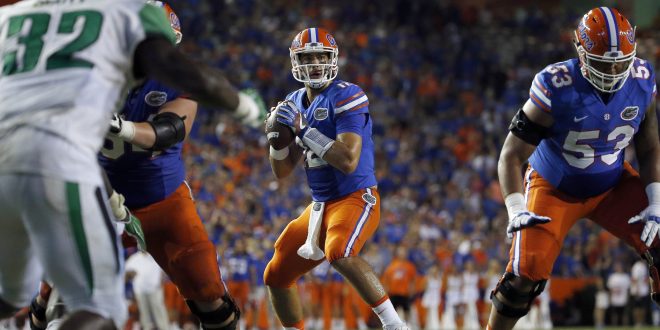 McElwain and Gators Prepare for Tennessee

After the Gators shut out the Mean Green of North Texas 32-0 on Saturday, Jim McElwain spoke to the media on Monday to talk about the upcoming game with rival Tennessee and the quarterback situation.

Coach Mac says all practices will be closed this week: "we need to keep some things just with the Gators"

The Gators will close practice this week, said Coach McElwain, to “give the media a break” and to work on a few things for the Tennessee game. Last year, Vols Quarterback Joshua Dobbs hurt the Gators with his run game. McElwain says Dobbs is as good as there is, they ran it down our throat a year ago, and they should feel pretty good about that.

McElwain also spoke about the injuries that are currently affecting the team. Kylan Johnson is out today with a leg injury, Chris Williamson with a knee injury and Antonio Callaway is still questionable because he is “hurting pretty good”. Quarterback Luke Del Rio is also out with a sprained left knee after being hit late in the third quarter on Saturday night. McElwain said he had a bum leg and he’ll be back sometime.

.@CoachMcElwain says there's no 'injury bug' at #Florida, only the 'opportunity bug.' Next man up mentality. #Gators #Vols pic.twitter.com/bVNGQoSOpB

Austin Appleby will take the field against Tennessee as the Gator’s starting quarterback. It is not clear yet who will take the spot as his back up for the game. The Purdue transfer took over for Del Rio against North Texas and completed two of his four passes for 30 yards. Appleby made 11 starts for Purdue before coming to UF and McElwain says his maturity and his love for the game is a positive, he’s been in big 10 stadiums but now he gets to go to a real fun place to play.

The Gators will travel to Knoxville to take on the Volunteers Saturday at 3:30 p.m.