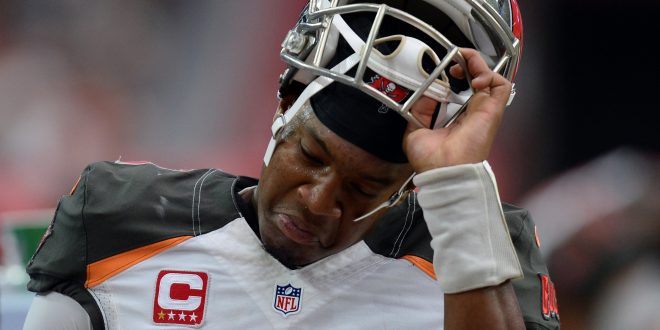 Rough Day for Winston as Cardinals Blow Out Bucs

It’s been a tale of two weeks for Tampa Bay Buccaneers quarterback Jameis Winston. In the Week 1  31-24 win against the Falcons, Winston threw for 281 yards and four touchdowns. And in a Week 2 40-7 loss against the Cardinals, he threw for 243 yards and one touchdown, but also threw four interceptions in the game.

Winston says he has to be more consistent.

Winston  looked to keep rolling with his performance last week by looking to strike first with a deep bomb to wide receiver Mike Evans, but instead it was Cardinals corner back Patrick Peterson on the receiving end grabbing his first interception of the season.

After trading punts in the first quarter, the Cardinals put up points on the scoreboard first in the second quarter with a four-yard Carson Palmer to Larry Fitzgerald connection. Palmer would go on to throw for two more touchdowns and a total of 308 yards.

For Winston’s only touchdown of the game it was another pass to Mike Evans for 19 yards that came in the third quarter. At that point in the game the Cardinals were up 24-7 and would only hold them to that touchdown.

The Cardinals kept rolling and added  more points from a Chandler Catanzaro field goal, a 60-yard pick-six from Marcus Cooper and a Chris Johnson touchdown run.

The Bucs will look to bounce back on Sunday when they host the LA Rams—which will be their first home game this season.