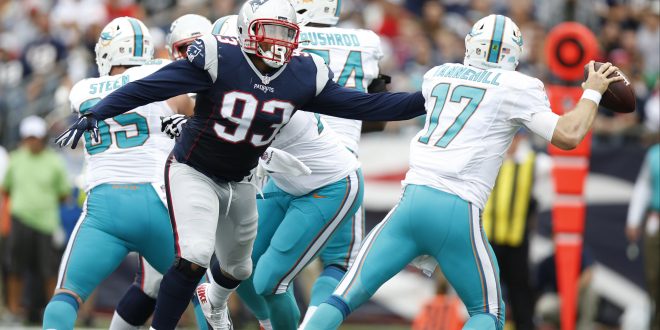 The Miami Dolphins are now 0-2 in the NFL regular season after suffering a 34- 21 loss to the New England Patriots. Going into the half with a 21- 0 scoreboard the Dolphins had to figure out how to put some points on the board. Late in the second quarter, Dolphins linebacker Kiko Alonso changed the game with a direct shot on Patriots quarterback  Jimmy Garoppolo. The hit on Garoppolo’s right shoulder knocked him out of the game, forcing the Patriots to put in rookie third-string Jacoby Brissett.  The Dolphins picked up the pace in the second half outscoring New England 21-7—but it wasn’t enough.

Dolphins quarterback Ryan Tannehill,  says he admires his team’s determination to keep fighting for a chance to win the game. Tannehill threw for 389 yards and two touchdowns. While completing 13-of-14 attempts for 176 yards in the third quarter—it just wasn’t enough to get his team a victory.

The team outscored New England 21-7 in the second half, but came up just short at Gillette Stadium. https://t.co/KVBQQ2M6sK

Dolphins Head Coach, Adam Gase, says as the coach, he needs to figure out how get his team to pick up the momentum in the second half. The Dolphins will play the Cleveland Browns (0-2) this upcoming weekend.

@JenniferStehlin
Previous Rough Day for Winston as Cardinals Blow Out Bucs
Next Preview: Bears and Eagles Set for MNF in Windy City