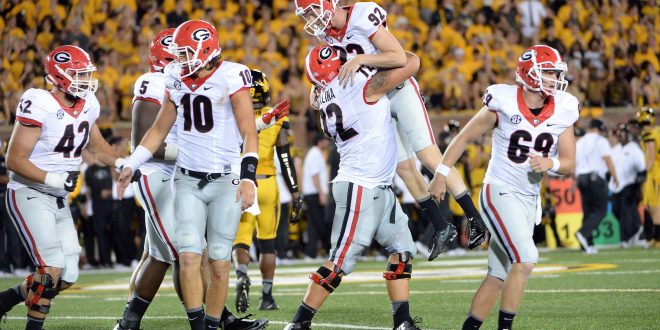 Some serious win streaks are on the line this weekend, including No. 12 Georgia’s 20 year win streak over No. 23 Ole Miss.  The Bulldogs (3-0) have not dropped a game against the Rebels (1-2) since Bill Clinton’s second term in office.  The two SEC teams have met 10 times over that two decade stretch, and the 1996 meeting was the last time Ole Miss managed to make the Bulldogs “Sit”, “Roll Over”, and “Play Dead”.
Ole Miss played two strong teams in the first three weeks of regular season play, losing to both Florida State and Alabama.  The Rebels need this win to make their record look somewhat respectable.  They opened against the then-No. 4 ranked Florida State Seminoles, losing 45-34. The Rebels got a break in Week 2 with a win over Wofford.  Week 3 was not an easy one for the team and fans who consistently yell “Hotty Totty” any chance they get.  The team played host to defending national champions Alabama, and lost 48-43.

Despite the less-than-desirable 1-2 record to start the season, the Rebels still played well against the Noles and the Tide.  The loss to Alabama was probably expected, but Ole Miss still put up an admirable fight.  The narrow loss proved that the Rebels are still a good team.  They may not win every game, but they can compete with the cream of the crop.

On the other end of the record spectrum, UGA drew some easy matchups to start their season.  The Bulldogs made it through three games without dropping one, but the record is less impressive when you realize who they played.  The Bulldogs opened their season against North Carolina, a notable basketball school.  The Bulldogs followed that up with a narrow 26-24 win over Nicholls (wait, who?) in Week 2.  After being thrown two softballs, Georgia had to prove themselves in Week 3 against SEC East rival Missouri.  The Tigers led by ten early in the game, but the Bulldogs were relentless and pulled off an even more narrow 28-27 win against Mizzou.

Now it’s Week 4, the past is in the past, and the two SEC teams are hungry for a win.  The Bulldogs’ narrow wins plus the Rebels’ narrow losses should equal a good matchup this Saturday.  The Bulldogs want to continue the success of this new-found “Smart Era”, while the Rebels want to put their early losing record behind them.

The Bulldogs are coming into Saturday’s game with a solid running game.  Their star tailback Nick Chubb managed to run for 222 yards against UNC in Week 1.  If Ole Miss wants to keep Georgia in check, they’ll need to keep track of the 5’10” junior and stop him every chance they get.  Another running back to watch will be Sony Michel.  The 5’11” junior is coming off of injury, but is a huge part of Georgia’s run game.

Starting quarterback Jacob Eason, a freshman quarterback, has thrown for 643 yards and five touchdowns in the first two games of his college career. It will be key for the Bulldogs to keep a balanced offense in order to not put too much pressure on the albeit highly touted player.

Kirby Smart, Georgia head coach, is in his first year with the Dawgs.  He knows going into Week 4 that it will be a tough matchup against a strong Ole Miss team.

The strong Rebel defense Smart eluded to includes Marquis Haynes, Isaac Gross and D.J. Jones, who all will be looking to make Eason’s job as difficult as possible.  Haynes, a massive defensive end, tied for fourth in the SEC and 19th in the nation last season with ten sacks, tying the team’s record for a single season.  The 6’3″ junior was named SEC Defensive Back of the Week three times last season and will be critical in stopping the Bulldog offense.

The Rebels will be happy to have Gross back on the field this season after he underwent neck surgery last season following the opening game.  The 6’1″ senior earned a medical redshirt after the injury, allowing him to return for a 5th season this year.  Gross is among the active SEC leaders with 27.5 career tackles for loss.  He is one of the Rebels’ co-starters at nose tackle.

Another co-starter at nose tackle for Ole Miss is Jones, who weighs in at an impressive 321 pounds compared to his 6’0″ frame.  Don’t let his build fool you though, he is good on his feet.  He moves well, making him unblockable at times. He was the Rebels’ most improved player last spring after finishing his 2015 season with 40 tackles.

Smart knows going up against Rebels quarterback Chad Kelly will be no easy feat.   Kelly has what smart calls a “hose of an arm”.  He threw for 421 yards against Alabama in Week 3, and if he can do that again this week, Georgia will have their work cut out for them.  If Ole Miss can get their offense working as a whole, the Bulldogs will have to be careful.

Hugh Freeze, head coach at Ole Miss, wants to get the win this week that seemed to slip through his team’s fingers last week. Freeze has been with the Rebels since 2012 and holds a 35-20 record with Ole Miss.

The Rebels and the Bulldogs will meet Saturday, September 24 in Oxford, MS.  Kickoff is set for 12 p.m. and coverage will be on ESPN.