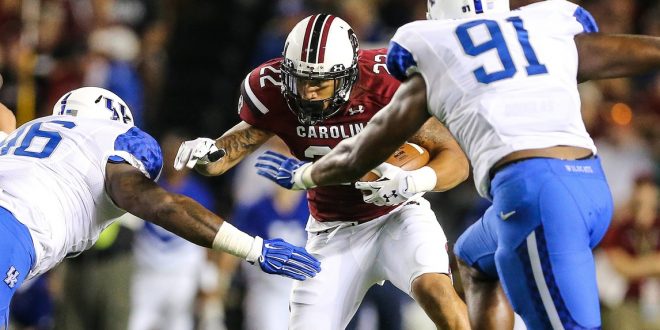 The Kentucky Wildcats (1-2) host the South Carolina Gamecocks (2-1) in Lexington on Saturday.

The matchup is crucial for both teams, with Kentucky needing a win to avoid beginning the season 1-3 to the season and South Carolina looking to kick off the Will Muschamp era with a 3-win start

The Gamecocks hired Muschamp as head coach in the offseason after a brief stint as the defensive coordinator for the Auburn Tigers.  Muschamp, who had signed a three-year contract with Auburn before agreeing to coach the Gamecocks, was also the head coach of the Florida Gators from 2011-2014.

Kentucky seeks success this weekend, trying to avoid another early season loss and gain ground in SEC standings. The Wildcats, who have won their last two contests against South Carolina, got their first win of the season last weekend against New Mexico State 62-42.

That game marked a breakout performance for Kentucky signal caller Stephen Johnson, who went in for the injured Drew Barker. Johnson threw for 310 yards, three touchdowns and added another 50 yards on the ground.

Stoops was very impressed with Johnson, a junior college transfer, and his efficiency in the offense.

On Saturday, the Wildcats will look to Johnson and running back Stanley “Boom” Williams for guidance but the defensive front remains shaky. Stoops said that Linebacker Courtney Love will need to improve his play if they want to be successful.

The Wildcats will have their hands full with South Carolina’s freshman quarterback Brandon McIlwain. Stoops is wary of  McIlwain, who he said is improving every week.

Defense may be the deciding factor in the matchup, with South Carolina allowing only 17 points a game to opponents while Kentucky gives up over 4o a game. South Carolina’s offense struggles where Kentucky flourishes, with the Wildcats averaging over 30 points to the Gamecocks only putting up 15 points a game.

To find out which side of the ball will make the difference, tune in Friday night at 7:10 p.m. EST on the SEC network.