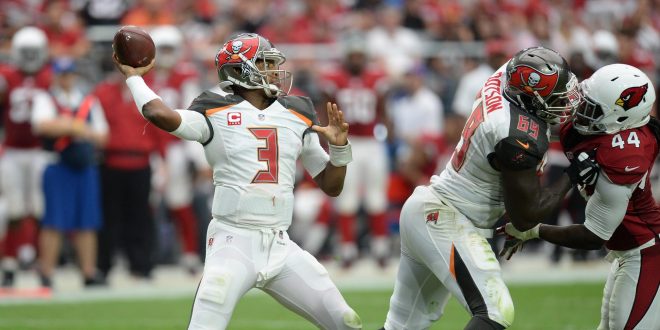 NFL Preview: Bucs Look To Bounce Back in Home Opener Against Rams

The Tampa Bay Buccaneers (1-1) kick off the home part of their schedule on Sunday when they host the Los Angeles Rams (1-1) at Raymond James Stadium.

The Bucs are looking to rebound after a two-game road trip that saw them earn an important 31-24 win at division-foe Atlanta, but then fall hard against the Cardinals in Arizona, getting blown out 40-7 by one of the league’s top offenses. Bucs head coach Dirk Koetter says his team is excited to be back home after being one of three teams to start the season on the road, and is ready to protect its home field.

The Bucs enter the game without starting running back Doug Martin, who may miss extended time with a hamstring injury. Charles Sims, who had over 1,000 yards from scrimmage last year, will slide into that starting role.

More pressure will fall on the shoulders of Jameis Winston, who followed up his four passing-touchdown performance against Atlanta with a four interception showing against Arizona. Winston has proved he can have success through the air on this Rams defense before, throwing for 363 yards and two touchdowns against them in St. Louis last season.

Winston’s go-to guy has been Mike Evans, who has 11 receptions for 169 yards and two touchdowns through the first two games. The two hooked up for Tampa Bay’s only touchdown last week.

While Winston’s had success connecting with Evans, his connection with his other standout receiver, Vincent Jackson, seems a bit off to start the season. Jackson has gotten his targets, 15 to be exact, but he’s only hauled in six of those passes for 62 yards and no touchdowns. With Martin already out, and the status of TE Austin Seferian-Jenkins in the air following a DUI arrest in Tampa on Friday, it’s important for the success of the offense that Jackson gets back on the same page with his second-year quarterback.

Against a stout Rams defense this Sunday, Tampa Bay will look to avoid turning the ball over, an area in which they sit dead last in the NFL (-6 turnover margin). Koetter says his team needs to do a better job of taking care of the football.

The defense will also be looking to make improvements this week, as they’ve given up the fourth-most points in the league through the first two weeks. Any improvements will led by linebacker Kwon Alexander, who has the most tackles and solo tackles in the NFL after two weeks. Luckily for Tampa Bay’s defense, they’ll be facing an offense who has only mustered a league-worst nine points through two games.

All of those nine points for the Rams came in last week’s 9-3 win over division-foe Seattle. Despite a lackadaisical performance from the Case Keenum-led offense, the Rams defense showed why they were one of the league’s top units last season, holding the Seahawks to just one Steven Hauschka field goal in the second quarter.

The Rams defense was led by Robert Quinn and Aaron Donald on the defensive line, combining for a sack and two tackles for loss, and the pair of Mark Barron and Alec Ogletree behind them, who led the team in tackles with 10 and nine tackles respectively.

The defense will need the offense to step up though. The Rams were shutout in Week 1 at San Francisco, Case Keenum hasn’t thrown a touchdown pass yet, and Todd Gurley, who ran for 1,106 yards in 13 games as a rookie, has been held to under 100 yards through two games.

The Rams won last year’s meeting between the two teams 31-23 in their last game in St. Louis, jumping out to a 21-3 lead before the Bucs mounted an attempted comeback in the second half that fell just short.