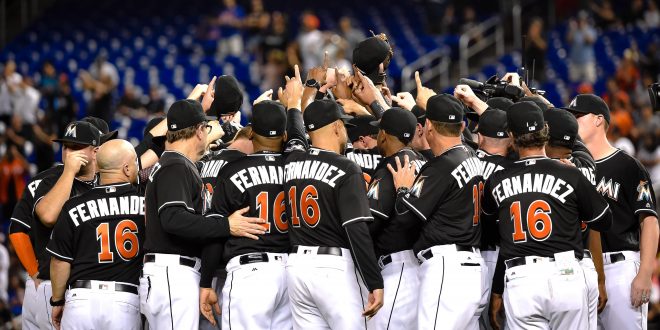 The Miami Marlins can only attempt to heal the undeniable sense of loss and anguish in their clubhouse following the untimely and tragic death of All-Star pitcher Jose Fernandez. And after a 12-1 blowout loss at home to the New York Mets on Tuesday, Miami will have the entire off-season to spend in mourning of their heralded pitcher.

The Fish simply couldn’t re-stage the same emotional performance that lifted them to a 7-3 win on Monday night over the Mets. Miami currently sits five games back from an NL wildcard spot, and has only four games remaining in their schedule (a rubber match with the Mets, and a weekend series with the Nationals).

Marlins manager Don Mattingly says the Fish let the game slip away from them. The Mets only held a 4-1 lead before exploding for eight runs in the final two innings.

Even if 78-79 Miami does escape their final four games unscathed, they would still have fewer wins than the San Francisco Giants, who currently hold an 83-74 record.

Playoff hopes took a bit of a back seat in wake of their loss. Though Marlins manager Don Mattingly says the team has done well in giving it their all on the diamond, they are still trying to make sense of this unforeseen tragedy.

The loss has been especially tough on Marcell Ozuna, who was invited to join Fernandez and his friends Eduardo Rivero and Emilio Macias on the boat when the accident occurred in the early hours of the morning.

Miami completes the third game of their three game home stand with the Mets at 7:10 p.m. tonight.