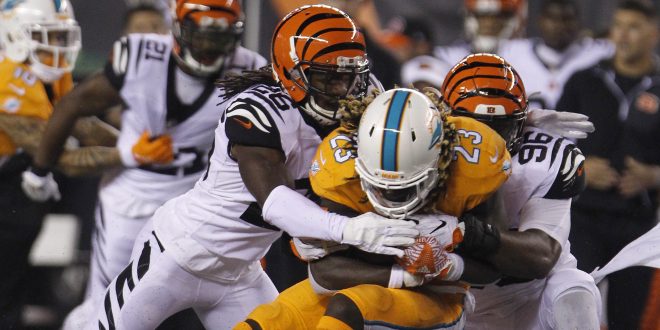 The Cincinnati Bengals improved to 2-2 on the season after dominating in every phase of the game in a 22-7 win over the Miami Dolphins Thursday evening. The loss drops the Dolphins to 1-3 on the season and last place in the AFC East.

Cincinnati held Miami to just 222 yards of total offense, forced two turnovers, and controlled the ball for over 38 minutes, 17 more than Miami, in a performance for which Dolphins Head Coach Adam Gase says that everyone on the team is taking blame.

The first quarter saw the most competitive stretch of the game, as the teams entered the second quarter with a 10-7 Bengals lead.

The Bengals struck first with a 42-yard Mike Nugent field goal on the opening drive, but Miami took the lead just three plays later. Dolphins quarterback Ryan Tannehill took the snap from the shotgun, pump faked to his right, before burning the Cincinnati blitz by finding Kenny Stills deep downfield for a 74-yard touchdown. It would turn out to be Stills only catch of the game, but it gave Miami the temporary 7-3 lead.

The lead wouldn’t last long though.

With 3:19 remaining in the first quarter, Bengals quarterback Andy Dalton found A.J. Green in the end zone for a 7-yard strike to reclaim Cincinnati’s lead. Dalton, who was efficient on the night, going 22-31 for 296, one touchdown and no turnovers, fed Green all game long. Green had a monster game, putting together a highlight-filled 10 reception, 173 yard performance that included that touchdown and a 51-yard jump-ball catch to start the drive.

The defense and special teams took over from the second quarter on.

The Bengals defense meanwhile dominated after the Stills touchdown. The defense came up with five sacks, held Miami to under 40 rushing yards, and forced a Ryan Tannehill turnover in the last five minutes of each half. With 2:14 to go in the first half, former Gator defensive end Carlos Dunlap got past Miami right tackle Ja’Wuan James, stuck out his right arm, and stripped the ball from Tannehill, with Bengals’ defensive lineman Domata Peko recovering the football.

.@Carlos_Dunlap speeds past the right tackle.

Tannehill’s second turnover of the game came as Miami was driving with just under five minutes left in the game, killing any chance of a Miami comeback. In Bengals territory, Tannehill looked for Leonte Carroo who was running a post route, but Bengals defensive back Chris Lewis-Harris sat underneath the route, and made the interception when the pass was under thrown, hitting him right in the hands for the easy pick.

The Dolphins will need to turn things around quickly if they want a chance at the division, as they already sit 2.5 games back of New England, who get Tom Brady back after this weekend. Their next opportunity to turn the season around will come when they host the Titans on October 9.

The Bengals meanwhile sit 1.5 games behind undefeated Baltimore in the AFC North, and have an intriguing two-game road trip coming up. They’ll visit Dak Prescott and the Cowboys in Dallas on October 9, before traveling to Foxborough the following week for an AFC showdown against the Patriots in Tom Brady’s second game back from suspension.