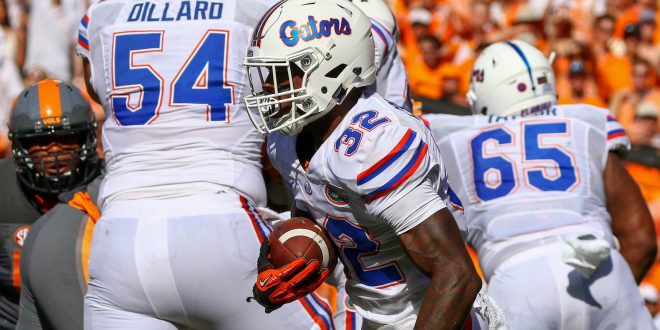 The Florida Gators are looking to redeem themselves this weekend in Nashville when they take on Vanderbilt after a hard-fought loss to Tennessee last week, where they saw an 11-year winning streak snapped. The 38-28 loss was a huge heartbreaker for Gator fans as well as for the team itself. The Gators offense played extremely well in the first half, but in the second half the Volunteers’ vastly improved. The Vols not only improved in all three major phases of the game, they quite simply seemed to have this fire within them that the Gators didn’t.

Austin Appleby, who started his first game as the Gator quarterback last week, said struggling on first and second down was a major part in the offense’s second-half struggles. The deep passing game that was successful in the first half for the Gators also disappeared in the second.

On the offensive line, the players admitted that the noise in Neyland Stadium played a factor in their struggles. This was especially a problem for the team in the second half as the Vols gained momentum and the crowd noise seemed to only make matters worse for the Gators.

Overall, however, the offensive line seems to have improved a great deal this year when compared to last year. Junior offensive lineman for the Gators David Sharpe certainly thinks so, as he believes the difference is evident.

Looking ahead to the Vanderbilt game, the Gators know they need to focus as a team to make sure they don’t turn one loss into two. The focus on this game will be on the running game, and the offensive line will inevitably play a major role in that.

With the attention from most fans on the “flashier” positions on the football field, the success the Gators offense has against Vandy will largely depend on how well the offensive line holds up.

Kickoff from Vanderbilt Stadium on Saturday is set for noon.

Hello my name is Kaitlin Alexander, a passionate story teller and lover of sports. Fun facts about me: I am a world traveler, interviewed all three UF Heisman Trophy winners, and a former intern of Bleacher Report. Follow me on Twitter: KalexanderUF
@KalexanderUF
Previous TNF Recap: Bengals Shut Down Dolphins in 22-7 Win
Next CFB Preview: 3 Different Top-10 Matchups Highlight Weekend