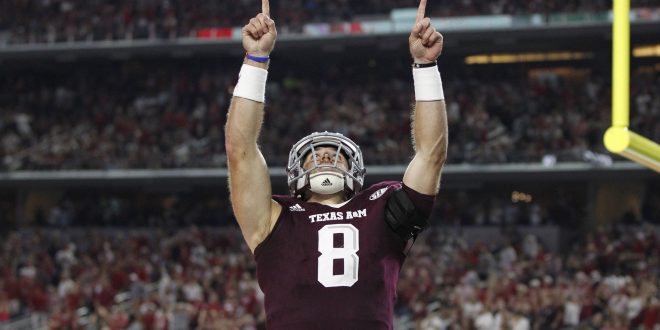 The No. 9 Texas A&M Aggies will be on the road this Saturday in Columbia to take on SEC foe South Carolina.  Going into this matchup, these two teams are at opposite ends of the SEC spectrum.

The Aggies come into town 4-0 on the season and 2-0 in the conference with standout performances from Oklahoma transfer Trevor Knight at quarterback and freshman running back Trayveon Williams. Knight has found his stride within the Aggie offense, throwing for 1,055 yards and seven touchdowns.  Head Coach Kevin Sumlin credits Knight’s confidence and leadership to his preparation over the summer.  Williams has rushed for 398 yards and has gone for 280 yards in the last two matchups against Auburn and Arkansas.  Defensively, the Aggies are holding opposing offenses to 16 points per game.

The biggest challenge for A&M?  Avoiding the plague of October’s past.  In each of the last two seasons, the Aggies have started strong with a 5-0 record in 2014 and a 4-0 record in 2015.  In both seasons, Texas A&M seemed to be contenders in the SEC West, but October derailed their chances.  The Aggies went 0-3 in October in 2014 and 2-2 in 2015.  However, coaching changes in the offseason and strong personnel could be the recipe to end their October curse.

South Carolina on the other hand, is struggling in offensive production.  The Gamecocks are 2-2 overall on the season and 1-2 in the SEC.  Their season started with a first half shutout against Vanderbilt, a game they came back to win 13-10.  However, low scoring and offensive production have plagued South Carolina all season.  They lost 27-14 to Mississippi, scoring both touchdowns in the second half. They then scored a season-high 20 points to win against East Carolina before losing to Kentucky 17-10 last weekend.  Head Coach Will Muschamp says quarterback Brandon McIlwain and the Gamecock offense simply isn’t producing consistently.  South Carolina does rank fifth in the SEC in scoring defense, holding opponents to 17.3 points a game.  The Gamecocks will indeed have to rely on their defense to stop the Aggies.

The Aggies and the Gamecocks kick off at 4 p.m. on Saturday on the SEC Network.