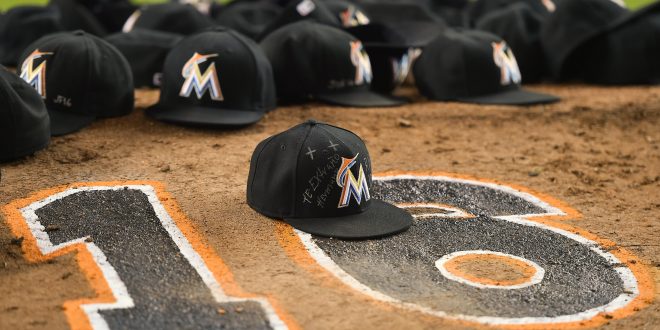 Marlins Fall Short of Playoffs in 2016

After losing Sunday’s game to the Washington Nationals, the Miami Marlins officially finished their 2016 season with a record of 79-82. It was a roller coaster of a season for Miami, who saw new talent, pivotal injuries, suspensions, and of course the tragic death of ace Jose Fernandez at the end of the season.

Offensively, the team struggled quite a bit. Slugger Giancarlo Stanton compiled enough injuries to keep him out of around 50 games this season, hitting 27 home runs in just 119 games played. Dee Gordon, meanwhile, was suspended for 80 games for his use of performance-enhancing drugs. Miami had high hopes for the second baseman who won the batting title during the 2015 season, but after returning to the team this year he hit just .268 with an on-base percentage of .305.

The Marlins did see a lot of their young talent take a step forward this season, giving manager Don Mattingly a reason to be proud. Christian Yelich, Marcell Ozuna, and Derek Dietrich all had big years for the Marlins in 2016. J.T. Realmuto also elevated his value to one of the best-hitting catchers in MLB, hitting .303/.343/.428. Another highlight for the team was veteran Ichiro Suzuki, who reached the elusive 3,000-hit milestone this season.

Before the team focuses on any on-field improvements next year, they will inevitably continue to mourn the death of beloved teammate Jose Fernandez. The 24-year-old Cuban pitcher died last Sunday after a boating accident off of South Beach, causing the cancellation of their game against the Braves. The team paid tribute to Fernandez in their first game without him by wearing his number and last name on their jerseys and laying their hats on the mound after their win against the Mets.

Tom Koehler says it will be good for the @Marlins to get some time with their families, decompress and try to hit the reset button. pic.twitter.com/iW9bbuyXtD