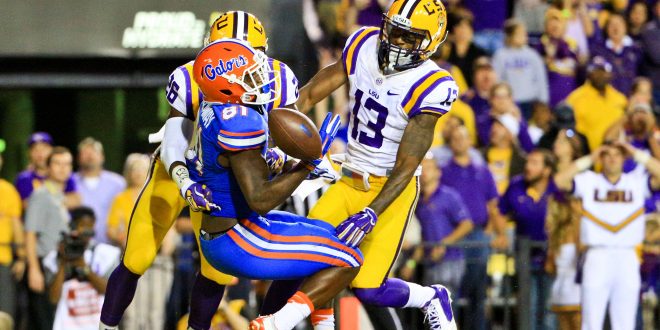 According to a release from the SEC, the postponed Florida-LSU football game that was to take place Saturday, Oct. 8 in Gainesville has now been moved to Nov. 19 and will be played at Tiger Stadium in Baton Rouge. The game was postponed Saturday because of Hurricane Matthew.

“It was important for us to come to a resolution. Each university had its own set of concerns throughout this process, however existing SEC regulations did not provide an avenue to resolve conflicting issues in a more timely manner,” SEC Commissioner Greg Sankey said. “As I have repeatedly said, this game needed to be played. In the end, I want to give credit to the University of Florida for making concessions to move this year’s game to Baton Rouge.” – SEC Commissioner Greg Sankey

Additionally, LSU agrees to play the 2017 matchup between the two teams in Gainesville. The previously scheduled matchup during the 2018 season will remain in Gainesville.

“As I’ve said all along – we will play anyone, anywhere, anytime. I think I’ve made that pretty clear.” — Mac on going to LSU

According to a release from the University Athletic Association at Florida and Athletic Director Jeremy Foley, LSU was never really a partner in this negotiation.

“We made this decision to play the game in Baton Rouge. The conference office asked us to find a solution in working with LSU, yet LSU was never a true partner in our discussions.  The Southeastern Conference offered some other solutions and the LSU administration made it clear that they were unwilling to consider other reasonable options.” – Jeremy Foley, Florida Gator Athletic Director

LSU was originally scheduled to play South Alabama on Nov. 19 in Baton Rouge and Florida was slated to host Presbyterian on the same day in Gainesville. LSU and Florida will exercise cancellation clauses for those respective games.

According to Floridagators.com, the game will be played no later than 3:30 p.m. ET, and Florida fans who wish to purchase tickets will be able to do so at a discounted price through the Gator Ticket office. Details will be announced at a later date.

Alabama scored a dominating 48-17 win over rival Tennessee on Saturday, but it also suffered …