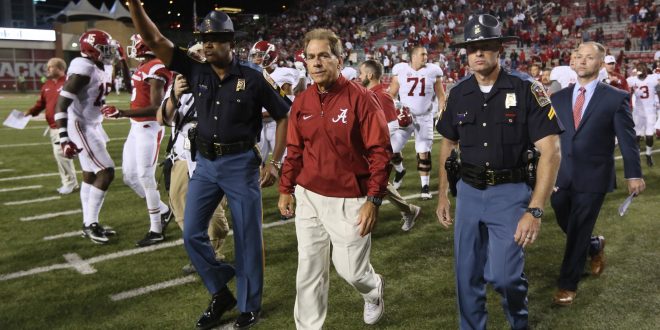 For the first time since 2005, the third Saturday in October features a top-25 showdown between the ninth-ranked Tennessee Volunteers (5-1) and Alabama’s top-ranked Crimson Tide (6-0). Heading into the highly anticipated SEC matchup, the Tide have a nine-game win streak against the Vols. Tennessee’s magical comebacks though, are setting the stage for an instant classic from Knoxville.

Volunteer head coach Butch Jones says this rivalry game will be difficult because Alabama has a balanced team with explosive athletes.

The Volunteers have been clutch come the fourth quarter since the beginning of the season. Their very first game was an overtime win against Appalachian State. From that point on, Tennessee has made a habit of late-game heroics. The team scored 35 unanswered second-half points against Florida, 20 fourth-quarter points against Georgia, and last week they had a 21-point fourth quarter performance before falling in double overtime to No. 6 Texas A&M.

To put Tennessee’s performances in perspective, Florida’s defense has only given up 58 points through five games. The Volunteers scored 38 of those points.

Jones says his players are more experienced after overcoming several tension-filled match ups. However, he’s aware Alabama will be their toughest opponent yet. According to Alabama head coach Nick Saban, this will be the most challenging game in freshman quarterback Jalen Hurts’ brief college career. Hurts is coming off of his best performance of the season, a 49-30 win at Arkansas. Hurts went 13-f0r-17 while earning a career-high 228.5 QBR via two passing touchdowns and an interception.

Butch Jones says the Volunteers must contain Bama’s high-scoring offense, which has outscored opponents 144-50 in first half points this season. If the Volunteer offense starts slow, Alabama may be able to gain an insurmountable early lead.

However, Saban knows the importance of playing consistently for sixty minutes, stating that he’s been disappointed with his team’s defensive effort this season.

The Volunteers and Crimson Tide will face off at 3:30 p.m. from Neyland Stadium.