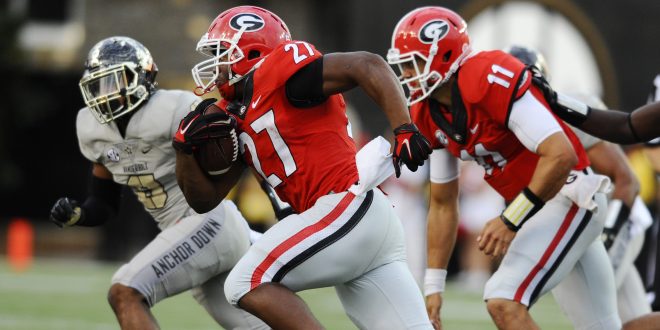 The Georgia Bulldogs will host Vanderbilt Commodores this Saturday for an SEC East football showdown. The Commodores are coming off a 20-13 loss against Kentucky this past weekend, making them 2-4 on the season. Meanwhile, Georgia improved to 4-2 after beating South Carolina 28-14. Vanderbilt has yet to win a conference game this season, but hopes to change that come Saturday.

Georgia came out victorious the last time these teams faced off, winning 31-14 at Vanderbilt. Georgia’s running back Nick Chubb ran wild against Commodore defense, tallying 189 yards on the ground. That marked the highest total for his 2015 season, which was ended short due to a knee injury.

Grayson Lambert was under center for the Bulldogs in their last meeting, but his performance was forgettable. Lambert only completed 11 of his 21 passes for 116 yards. Georgia has since moved on from Lambert. Now Vanderbilt will have to defend against a passing attack lead by freshman Jacob Eason.

The Bulldogs have won the previous two match ups, and hope to make it three in a row in front of their home crowd. This is also Georgia’s Homecoming game. Georgia coach Kirby Smart says the team is excited to play in front of former players and alumni.

For Vanderbilt, they started off strong against Georgia in last season’s meeting. The Commodores didn’t allow a completed pass until the third quarter. But despite limiting Georgia to 141 yards passing, Vanderbilt gave up nearly 300 yards on the ground.

However defense hasn’t been much of an issue for the Commodores this season. They have allowed just 23 points per game on the year. Although Vanderbilt has a 2-4 record, the team has been competitive in just about every game.

Vanderbilt has yet to face a running attack  like Georgia’s in 2016. Georgia expects to have the SEC’s fourth leading rusher Nick Chubb and Sony Michel fully healthy for this Saturday’s game. The two backs are both coming off 100 yard performances and Chubb picked up two touchdowns in the victory over South Carolina. Vanderbilt head coach Derek Mason knows he’s facing a tough rushing attack, but says Georgia has a three-headed monster in the backfield, not just two.

Although Georgia’s rushing attack is one of the best in the SEC, Vanderbilt running back Ralph Webb is currently second in rushing yards in the SEC this season. However, Webb is dealing with an ankle injury that forced him to exit the South Carolina game early. However, Mason feels good about the health of his entire team, including Webb. A healthy Webb will be a a focal point for this Vanderbilt offense, as he also averages the second most yards per game in the SEC.

If Georgia can start out with a strong rushing attack, the passing game will open up for Eason, who is still adjusting to the college game. Eason is completing just over 51 percent of his passes this season, but he could be in for a big day as Vanderbilt ranks 68th in team passing defense.

Saturday’s showdown is set to kick off at noon and can be seen on SEC Network.