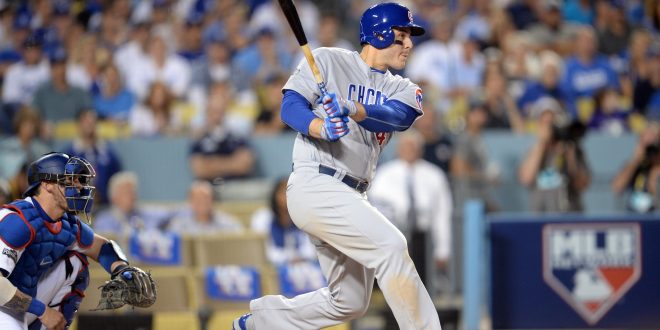 The Cubs scored a commanding road playoff victory against the Los Angeles Dodgers 10-2 on Wednesday night.

While the Cubs finished with plenty of runs, they didn’t get off to such a hot start. They were held hitless throughout the first three innings of Wednesday’s contest. That all changed when left fielder Ben Zobrist opened up the scoring with a bunt of all things. The bunt from Zobrist was the first hit in a four-run inning that got things rolling for Chicago.

Since 2000 only one other time has a clean-up hitter bunted in post season play, according to ESPN. That player? Ben Zobrist.

Before Zobrist’s game changing bunt there was another notable play that changed the course of Wednesday’s game. In the second inning, Dodgers first baseman Adrian Gonzalez was called out on home plate when many, including the Dodger fans present, who began to chant the word safe in response to the call, believed the call to be incorrect.

Watching the @Dodgers vs @Cubs as a fan & here at the stadium, even Cubs fans can't believe the @Adrian_ElTitan late tag at home was upheld pic.twitter.com/VEE8e5MXvw

After reviewing the play, it was determined that they could not definitively determine if the runner was out or not and the call stood

Somehow this is an out. #NLCS Takeseries lead tomorrow! Got to do this. Us against the world. pic.twitter.com/DAM8BRytrT

Another game-changer for the Cubs was the play of first baseman Anthony Rizzo. The all-star had struggled so far in the post season, going 2-for-26 in the playoffs. Wednesday night changed that, with Rizzo going 3-for-5 including three RBI. The reason for his sudden change in play? A bat borrowed from teammate Matt Szczur. Szczur, who is an outfield reserve for the Cubs, uses the same model bat as Rizzo.

Rizzo also homered on Wednesday, meaning he’ll probably be sticking with that bat.

Cubs and Dodgers on Thursday

Both teams will look to take the lead on Thursday as the series has its last game in Los Angeles. First pitch is tonight at 8 p.m.

Houston Astros Ready for Next Season