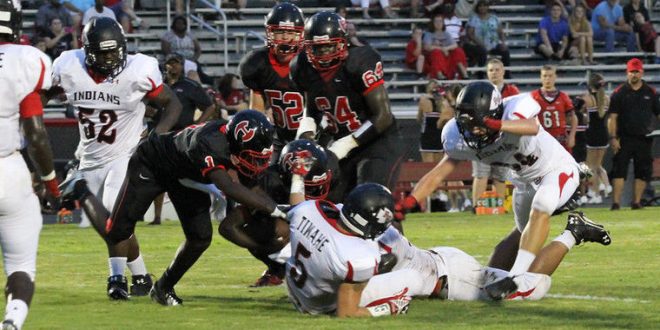 Wednesday football tonight at Citizens Field: Fort White vs. Eastside at 7 p.m., will be there with updates

This is head coach Ced Daniels’ first year with Eastside. The Rams are only averaging 12 points a game and allowing an average of 31 points per game on defense. Carter Kutchko has one touchdown and two interceptions and is completing 51 percent of his passes. To try to fix the offense, Daniels is turning to Anthony Richardson for the quarterback position.  Despite the team’s struggles, Coach Daniels does see some positives.

One offensive player on Eastside who is having a solid season is wide receiver Devonte Tanksley. The junior has one receiving touchdown and is averaging 84 receiving yards per game.

Fort White, unlike Eastside, is enjoying a very good season under 10th-year head coach Demetric Jackson. The Indians are 5-2 and averaging 30 points per game while allowing an average of 15 points per game on defense. Offensively, Demetric Jackson has developed into a solid dual-threat quarterback as he has six touchdowns through the air and seven touchdowns on the ground. Shannon Showers has been a capable receiving threat with four receiving touchdowns and 18.8 yards per catch. Coach Jackson says chemistry and health have been the biggest keys to his team’s success.

Eastside and Fort White will play each other tonight at 7:30 p.m. at Eastside.

This weekend has a whole slate of high school football in Alachua County. Thursday Night …