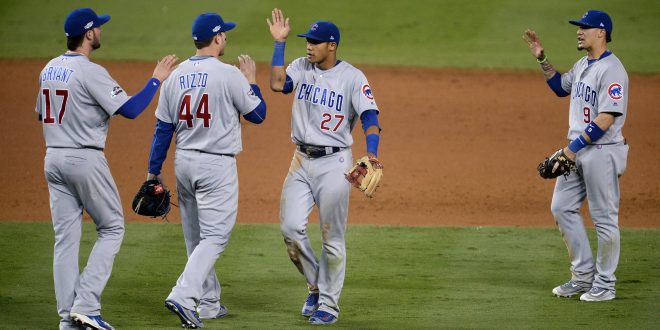 The Chicago Cubs are one win a way from booking a ticket to the 2016 World Series. After the Cubs 8-4 win against the Los Angeles Dodgers in Game 5 of the National League Championship Series Thursday night, the Cubs now lead  the series 3-2. The Cubs will travel back to Wrigley Field for Game 6 for a chance to win the NLCS at home.

The action started off early in the game for the Cubs when Anthony Rizzo hit a line drive double to right field, bringing in Dexter Fowler to the home plate. It wasn’t until the fourth inning when the Dodgers answered back when Adrian Gonzalez grounded out, bringing Howie Kendrick home to bring the score 1-1. In the sixth inning, a homer by Addison Russell to center field lead to two more runs pushing the lead to 3-1 for the Cubs.

The Cubs fire continued to blaze in the eighth inning as they scored five more runs. Dexter Fowler started off the five-run inning with a grounder to first base scoring Addison Russell. Willson Contreras was next to bring in a run after Kris Bryant singled to third base. Next to add to the Cubs scoreboard was Dexter Fowler, Kris Bryant and Ben Zobrist. Javier Baez, hit a line drive double into right field which was enough to bring the three to the plate.

The Dodgers chance at a turn around came up short. They were only able to squeeze one run in when Carlos Ruiz sent a fly ball into center field, scoring Andrew Toles. The score going to the ninth 8-2 and the Dodgers had a lot of catching up to do.

The ninth inning was a fight for the Dodgers to stay alive. Josh Reddick launched a line drive single to center field, scoring Adrian Gonzalez. Finally, Andrew Toles hit a fly to center field bringing in Joc Pederson. The effort from the Dodgers wasn’t enough leaving the final score of the game 8-4 to the Cubs.

Game 6 is set for 8 p.m. Saturday night at Wrigley field. The Dodgers will look to stay alive in the NLCS while the Cubs will try to grab a win at home to earn a trip to the World Series.