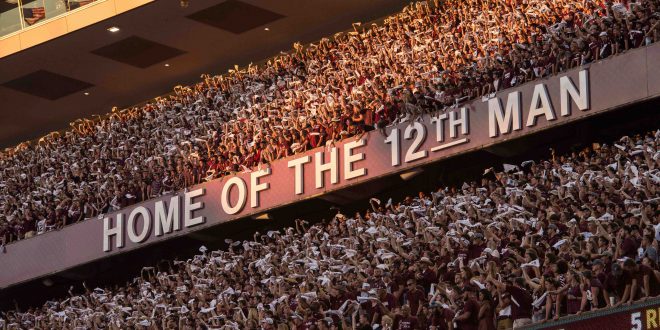 Oct 8, 2016; College Station, TX, USA; A view of the fans and cadets and the 12th man logo during the game between the Texas A&M Aggies and the Tennessee Volunteers at Kyle Field. The Aggies defeat the Volunteers 45-38 in overtime. Mandatory Credit: Jerome Miron-USA TODAY Sports

Planning on sitting on the coach all day watching college football?  These are the games you need to be keeping an eye on this weekend as we enter Week 8.

This week features a few top 25 match-ups and some intriguing upset bids alike.  Every game has vital importance with the upcoming conference championships and the college football playoff.

A top ten match-up in the SEC, not much can be better then this. The Tide will look to stay “on a roll” against a tough Aggie team this weekend. Alabama leads the all time series 6-2, including winning the last three.

The Crimson Tide and the Aggies sit atop the SEC West and are the only undefeated teams left in the SEC. Foregoing an unforeseen upset in the future the winner of this game will be the representative for the SEC West in the SEC Championship, a spot Alabama has claimed the past three of four years.  Texas A&M have not made it to the title game since they joined the conference in 2012.

Arkansas at Auburn is the second of three top 25 match-ups in the SEC this weekend. Both teams are looking to stay competitive in the SEC East trailing Alabama and Texas A&M.  Auburn leads the all-time series 13-11, although Arkansas won the last meeting 54-46 in Arkansas.

Arkansas is coming off a thrilling victory versus Ole Miss 34-30.  This was Arkansas’ first win in conference, and their last game of their four-game home stand.  Arkansas will be on the road for the first time since Sept.11. Auburn is coming off a bye week after they defeated Mississippi State 38-14 on the road.

The Rebels at the Tigers is the last of the top 25 match-up this weekend. LSU leads the all time series 59-41.  Teams have alternated wins the past four years with the home team always coming out on top.

The Rebels are looking to obtain their second conference win on the season. Looking ahead to bowl season the Rebels also look to add another solid win to their resume.  The Tigers on the other hand are trying to keep their two-game winning streak intact as they host the Rebels this weekend then the Crimson Tide next weekend in Baton Rouge. LSU will get a lift with the expected return of star running back Leonard Fournette.

The NC State Wolf Pack gave No. 3 Clemson a scare last weekend missing a chip shot field goal with little time left in regulation, then losing in overtime.  NC travels to Louisville this weekend to try and spoil college football playoff dreams once again. Louisville leads the all time series 5-1, winning the last two. Louisville should be on guard after seeing the struggles Clemson had with NC State last weekend, but a sleepy noon kickoff adds intrigue into what could be the biggest upset of Week 8.

Kickoff is at noon on ABC

The Horned Frogs at the Mountaineers is one of the less talked about games this weekend.  In a week packed with SEC action it is easy to miss, but still one that can pique curiosity.  TCU leads the all time series 3-2 winning the last two games, but the Mountaineers come into this game undefeated.

If a high-scoring shootout is what you look for this is the game for you.  Both teams boast have powered offenses. TCU averages 40 points a game and West Virginia 32. TCU will look to get one more defensive stop then West Virginia as they attempt to upset their conference opponent on the road.