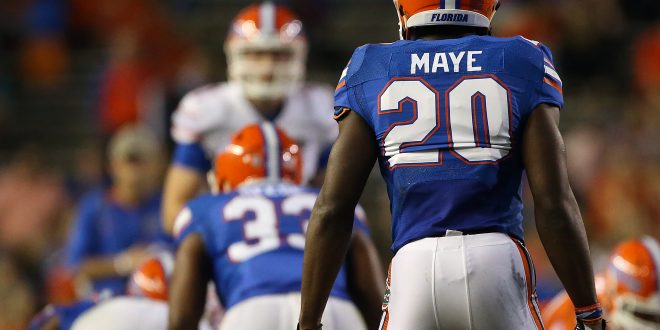 Florida Gator safety Marcus Maye spoke to the media Monday morning, touching on various topics. The Gators will travel to Jacksonville this weekend in their rivalry matchup against the Georgia Bulldogs. Kickoff is scheduled for 3:30 p.m. on CBS.

The semifinalist list for the Jim Thorpe Award was released Monday morning. Many were surprised to see that the Gators’ defensive back trio of Quincy Wilson, Jalen ‘Teez’ Tabor and Maye were not found on the list, including Maye himself.

Maye was not informed until a reporter asked him a question regarding his thoughts about being snubbed. His initial, natural reaction was, “Oh, wow.” He then went on to discuss his thoughts on his teammates being left off the semifinalist list.

Despite not being on the list this time around, new members of the list can be added through November 22, which is when the three finalists are announced. The winner of the Jim Thorpe award will be announced on December 8.

Per the @jimthorpeaward, a finalist for the award does not have to be on the semifinalist list, which was released today.

Choosing to Stay Another Season

Once last season concluded, Maye was faced with the decision to opt for the NFL Draft, or to stay another season in order to boost his draft stock. He obviously chose to stay in Gainesville one more year. When speaking to the media, Maye expressed he remains happy with that decision.

He also discussed which skills he wants to perfect prior to the 2017 NFL Draft.

Maye briefly talked about the importance of having linebacker Jarrad Davis as a leader on the field. Davis injured his left ankle October 15 against Missouri and is questionable for the upcoming game against the Bulldogs. Davis leads the Gators with 48 tackles.