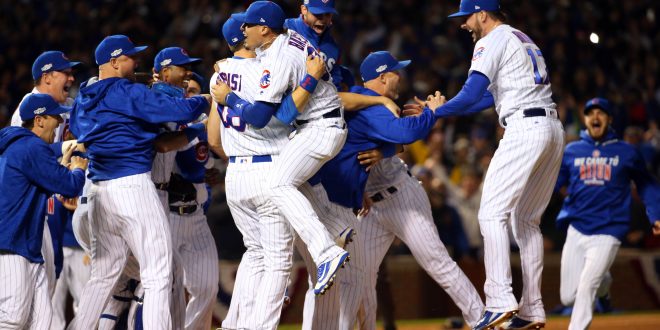 The Chicago Cubs celebrate defeating the Los Angeles Dodgers in game six of the 2016 NLCS at Wrigley Field. Cubs win 5-0 to advance to the World Series. --Jerry Lai-USA TODAY

Saturday night, The Chicago Cubs punched their ticket to The World Series for the first time since 1945.  Five years ago, the Cubs signed former Boston Red Sox General Manager Theo Epstein. Epstein was hired by the Red Sox in 2002, and in 2004 led Boston to their first World Series title since 1918. He added another World Series title three years later in 2007. Cubs fans are hoping Epstein can bring that same magic to Chicago’s championship drought.

The Cubs have received big production from young stars in 3B Kris Bryant and 1B Anthony Rizzo. Bryant’s 39 HR and Rizzo’s 32 HR combined for 71 total this season.  The pair also had identical averages (.292), and on-base-percentages(.385).

Addison Russell and Anthony Rizzo, struggled early in the post-season, entering Game 4 of The NLCS with just three combined hits.  The pair broke out in Game 4 however, each going 3-for-5 in Game 4.

Each then went 2-for-5 in Game 5, highlighted by Russell’s sixth inning 2-run homer.  Another combined three hits for the pair in the clinching Game 6 included an Anthony Rizzo home run blast to right off the Dodger’s Clayton Kershaw.

Bryant however will have his work cut out for him against the Indians heavy right-handed staff, as he had noticeably more success versus left-handers this season with a .314 avg/1.060 OPS compared to .284 avg/.896 OPS vs. right-handers.

The Cubs starting pitching has been stellar all-season, especially at the front end of the rotation with Kyle Hendricks (2.13 ERA) and Jon Lester(2.44 ERA) having the top-two ERA’s in the Majors.

Rounding out the Cubs deep rotation, is 38-year-old veteran right-hander John Lackey. Lackey turned in 20 quality starts this season along with a 3.35 ERA, and is known for his competitive nature in big games which earned him the nickname “Big Game Lack.”

Although, it has not officially been announced, Cubs manager Joe Maddon is expected to hand the ball for Game 1, to left-hander Jon Lester.

With a lead late in the game, Chicago will have 100 mph+ flame thrower Aroldis Chapman to close out games.  Maddon has not been afraid to use Chapman in multi-inning situations this post-season. However Chapman has fared much better starting an inning, than coming in with men on-base.

Cubs Manager Joe Maddon, is one of the best in the game.  Look for him to continue to align his defenses, using non-traditional shifts to take away would-be Indian hits.

Maddon known for his relaxed clubhouse style, wants his team to “slow the moment down and really enjoy it.”