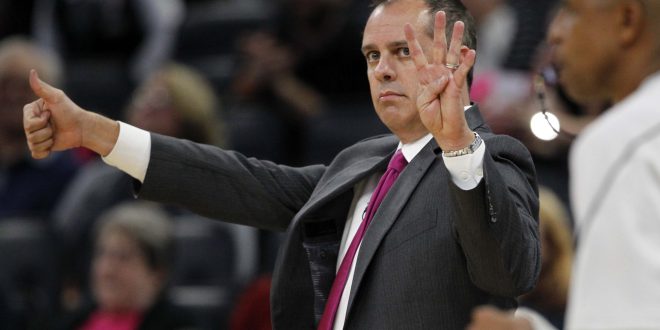 NBA Preview: The Orlando Magic Rebuild is Coming to an End

Basketball is back, the Orlando Magic are ready to make a name for themselves in this upcoming season. We are still one day away from the start of the 2016-2017 season and two from the Magic’s opening game, but there a still many questions to be answered. The Magic are coming off a 35-47 season, which was a ten game improvement from the 2014-2015 season. Orlando has been re-building with a young nucleus of players since the departure of Dwight Howard. With most of those players having two or more seasons under their belt, the Magic feel like they are ready to make a playoff push this season, lead by new Head Coach, Frank Vogel.

Frank Vogel spent the previous six seasons as the Head Coach for the Indiana Pacers. After Vogel took over as the Pacers head coach halfway through the 2010-2011 season, he led the Pacers to five playoff appearances. The Pacers made it to two straight conference finals appearances in 2013 and 2014, but fell short to the Miami Heat in both series. Indiana decided it was time to move on from Frank Vogel this summer, and the Orlando Magic decided to make him their new guy.

Vogel is the third head coach Orlando has hired since the end of the Dwight Howard era. The most recent head coach, Scott Skiles, left the team after one season. Luckily for the Magic, Vogel was released at around the same time as Skiles announced his resignation, so the decision was an easy one. Senior Vice President of the Orlando Magic Pat Williams believes Vogel’s track record and previous jobs within the league have helped him become one of the great  Head Coaches the game has to offer.

The Orlando Magic have been a lock for the NBA Draft lottery for a number of seasons, but last season was slightly different. The Magic were not one of the worst teams in the NBA last season. In fact, they contended for a playoff spot until around the middle of March as they ended up with the 11th pick in the 2016 NBA Draft. Rather than adding another young player to the roster, Orlando decided to trade their pick, along with former second overall pick Victor Oladipo, and Ersan Ilyasova for Serge Ibaka.

Ibaka should play a similar role in Orlando to the one he had as a member of the Oklahoma City Thunder. However, now that Ibaka is a solidified veteran who has been apart of multiple post season runs, the Magic hope he can instill that in the young guys on the roster.

This wasn’t the only move the Magic made this off-season. After letting go of Oladipo, the Magic re-signed Evan Fournier, and brought in Bismack Biyombo, Jeff Green, and D.J. Augustin to provide more of a veteran presence. Each of these new players should have an immediate impact for Orlando. Ibaka will move into the starting lineup for the Magic, moving Aaron Gordon to the Small Forward position. Biyombo, Green, and Augustin should all be the primary backup at their positions, and could all could see time in starting lineup if someone gets injured.

The End Goal: Make the Playoffs

The Magic feel like the rebuild is finally over. Although there is room for improvement, the team should have the pieces to make a run at one of the lower playoff seeds in the East. The Eastern Conference is not the same as it has been in the past. The Western Conference has dominated the East when it comes to the regular season over the years, but the gap is closing fast. The East has become very competitive during the regular season, as Cleveland is the only true standout.

Teams like the Milwaukee Bucks, Chicago Bulls, and New York Knicks have all made big off season moves as they hope to return to the post season after failing to last season. Although the Magic will have to compete with these teams, the Magic’s top priority should be to win the Southeastern Division.

The Magic are one of the five teams that make up this division, along with the Atlanta Hawks, Charlotte Hornets, Miami Heat, and the Washington Wizards.

After trading Jeff Teague and losing Al Horford to free agency, the Hawks will look to Dennis Schroder to run the show in Atlanta. The Hawks also added Dwight Howard, who spent the last three season as a member of the Houston Rockets. Last season, the Hawks finished 48-34 which landed them the fourth seed in the playoffs last season. Although Atlanta’s offense may not be as productive without Teague and Horford, the addition of Dwight Howard will help a team on the defensive end, while adding more rebounding to a team that was near the bottom of the league in rebounds per game.

The Charlotte Hornets let Al Jefferson and Jeremy Lin walk in free agency so they could resign other valuable player like Nicolas Batum and Marvin Williams. The Hornets showed the most improvement out of the teams in the south-east division last year, who also finished 48-34 and was the sixth seed in the playoffs. Although Charlotte lost to Miami in the first round of the playoffs, the team can focus on developing around Kemba Walker and Batum.

The Miami Heat were the most talked about team in this division during the off-season. With Chris Bosh’s continuing blood-clot issues, and losing Dwyane Wade, Loul Deng, and Joe Johnson, this years Heat team will look much different than it has in years past. Miami has a young core of shooting guards that could take the place of Wade’s production on the court, but won’t make up for his leadership skills. Now it is up to Goran Dragic and Hassan Whiteside to lead this new look Heat team to the post season.

Lastly, we have the Washington Wizards. Before last season began, the Wizards were thought to have one of the best back-court tandems in the league with John Wall and Bradley Beal. That didn’t exactly pan out throughout the season. The team failed to make the playoffs after reaching two straight Eastern conference semi-finals appearances. Granted, Beal missed most of last season with lingering injuries. However Washington is still confident in their back court, and they proved that by making Beal the highest paid player in team history. The idea that this back court could be one of the best in the league is still a mystery, but the potential is there without question.

As the season approaches, it’s hard to pick a favorite to win this division. However, each team will be able to make their cases once the season gets under way. But for the Magic, the focus should be solely be on making the playoffs.

The Orlando Magic will host the Miami Heat this Wednesday. Game time set for 7 p.m.

@WillBenner1511
Previous Another Title for The Land?
Next Broncos Spoil Osweiler’s Return to Denver