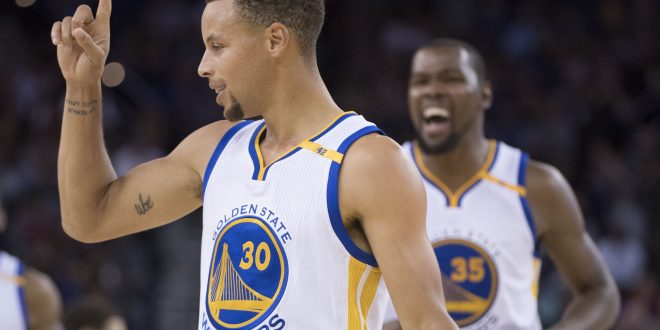 It’s that time of year again, as the NBA superstars lace up their shoes to prove that their team is the best. Arguably, the stars in the Western Conference burn brightest, with names such as Stephon Curry, Russell Westbrook, and James Harden. However, only eight teams can make it to the playoffs and only one can play in the Finals. The Western Conference will look to claim dominance over the East once again, with 11 of the last 17 champions coming from the Western conference.

With no surprise, the favorite coming into this year to win the west is the Warriors. With the dynamic duo of reigning MVP Steph Curry and Klay Thompson, comes the addition of Kevin Durant. Durant’s career has been a spectacular one so far as he averages 27.4 ppg and has an NBA MVP award on top of that. The Warriors also have plenty of talent elsewhere, including Draymond Green who had a breakout season last year, proving that he can play with the best in the NBA. The Warriors have built their own “Big Three” this season and will be looking to roll to a third straight NBA Finals.

TONIGHT IS THE NIGHT. #GoSpursGo pic.twitter.com/SKtXeF3Ib8

The Spurs said Goodbye to one of their golden boys last year Tim Duncan, a prominent force in bringing four titles to San Antonio. This year, they still have plenty of familiar faces such as Tony Parker, Manu Ginobili, and Kawhi Leonard. Leonard has proven to be a dominant force for the Spurs, lighting up the scoreboard for 21.2 ppg. Though, they have added new talent with Pau Gasol who will look to fill in the void down low.  Gasol played a big role in Chicago last season, averaging a double-double with 16.5 ppg and 11 rpg.  With the retirement of a legend, more pressure will fall on their shoulders to prove that the Spurs are still a legitimate threat.

What may be the biggest threat to the Warriors comes from the Thunder. The Thunder, after losing Durant in free agency, will look for revenge and have the talent to do so. They star Russell Westbrook, widely considered one of the best point guards in the NBA. OKC added Victor Oladipo from the Orlando Magic to aid Westbrook in the front court averaging 16 ppg and 3.9 assists last season. Looking towards the upcoming season, the Thunder will have to find a way to get past losing their former franchise player in Durant.

Once again, the hype builds around the Clippers as the team of LA. Welcoming back Chris Paul and Blake Griffin, the Clippers will be poised to strike in a postseason run.  Paul, a 9-time NBA All-Star, has not slowed down with age after averaging 19.5 ppg last season.  LA will hope to see a healthy Griffin this season after being limited to 35 games last season due to a left quadriceps injury.  The Clippers also added a big body this offseason from the Warriors in the form of Marreese Speights.  Speights was a crucial bench player for the Warriors and will look to help down low for the Clippers. With the new addition, it makes the Clippers a  solid threat and potential to become the best in the west.

Houston is home to one of the most prevalent scoring threats in the NBA, James Harden.  Harden came out every night draining baskets on his way to averaging 29 points per game last season.  The Dwight Howard experiment admittedly failed in Houston, as they were dismissed early in the playoffs.  Howard departed from Houston this offseason, signing a three-year $70 million dollar contract with the Atlanta Hawks.  This year, the Rockets made several off-season moves bringing in Ryan Anderson, Eric Gordon, and Nene Hilario.  Gordon will compliment Harden at the guard position with both having the ability to score.  They’ll look to replace Howard with Anderson and Nene, both whom are capable of holding their own down in the paint.  With so many new additions, the Rockets will hope it all adds up to a more successful playoff run.

There is no shortage of talent in the Western Conference this season. With all the teams poised up for a playoff run, speculations and media can only predict so much.  Will the Warriors just reign supreme with no competition or will they be overtaken by another talented team?  We will not know for sure until the playoffs, but what we do know is that the NBA season is starting tonight and anything can happen.

There will be NBA basketball. But will all the players be there as well? That’s …