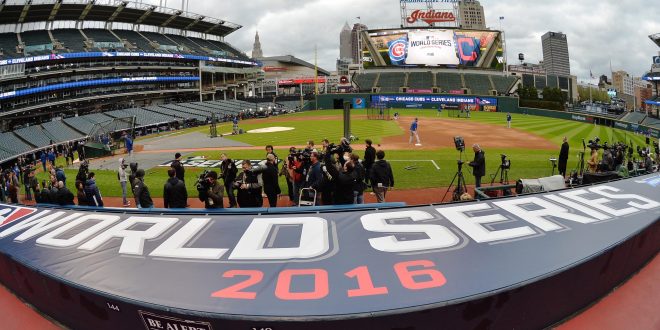 Oct 24, 2016; Cleveland , OH, USA; General view of the field during work out day prior to the start of the 2016 World Series at Progressive Field. Mandatory Credit: Ken Blaze-USA TODAY Sports

The Cubs will send lefty Jon Lester to the mound in Game 1. Lester is coming off a stellar outing, a 7-inning win over the Dodgers in Game 5 of the NLDS. He has been reliable all October for Chicago, posting a 0.86 ERA. The Cubs will look for him to continue his success in Game 1.

The Indians will start their ace, Corey Kluber. Kluber has been almost unhittable in his first postseason, boasting an ERA of just 0.98. He has tossed multiple scoreless outings this October. Cleveland will look for him to continue this trend and hold off the Cubs.

Although there has been lots of buzz leading up to Game 1, perhaps the most intriguing news came from Chicago earlier today: he Cubs have officially placed slugger Kyle Schwarber on their World Series roster. Schwarber is returning from knee surgery, which he had about six months ago. He will be the designated hitter for Chicago tonight.

Cubs Looks to Stay Hot at the Plate

The Cubs will be looking to carry their recent offensive success into the World Series. Infielder Javy Baez has made a name for himself this October. Teammate Anthony Rizzo says he is glad Baez’s talents are being showcased on a national level. Baez was named the NLCS co-MVP (shared with Jon Lester). He has hit .342 this postseason, with an OPS of .892. Shortstop Addison Russell has also had big moments at the plate, hitting a pair of key home runs. Russell says the team has worked hard all season and they are excited to have the opportunity to win it all. Chicago will need their young stars to solve the Indians’ pitching early in the series in order to be successful.

Pitching has been a strong point for the Indians all season. In particular, Andrew Miller has been lights out from the bullpen, earning the ALCS MVP award. Miller has not given up a single run all postseason. He has given up just 5 hits through 11.2 innings and has 21 strikeouts. Miller says he knows he will be facing the best of the best in the Cubs and is prepared for their lineup. If Miller continues to see success into the World Series, it will be instrumental for Cleveland.

The game is set for 8 p.m.. It can be heard right here on ESPN Gainesville 95.3, with coverage beginning at 7 p.m.

Born and raised at the ballpark! Typically quiet- until it comes to sports. I'm a South Florida native with a passion for baseball nearly as strong as my faith. Grew up in garnet + gold, turned out sporting orange + blue. Likely to be found with a camera. And yes, I take food pictures.
@victoriarossman
Previous NBA Western Conference Preview
Next Miami Heat Season Preview