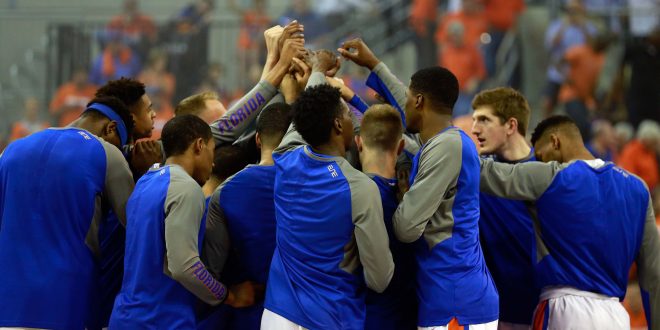 Gator football isn’t the only ball team making the trip to Jacksonville this week.

Florida men’s basketball will face the Eckerd Tritons—a division II team in the Sunshine State Conference out of St. Petersburg, FL. The Tritons won their conference title last season and although the Gators see this as a tune-up exhibition game, they know that this team is one that is competitive.

The Gators are playing in Jacksonville due to the $64.5 million dollar renovations that the O’Connell center is going through until mid-December.

What head Gator basketball coach Mike White says that “more than anything this game is an evaluation of where we are.”

He even wants to try players out in different positions with KeVaughn Allen who’s normally a shooting guard, to try him as point guard behind Chris Chiozza, who will most likely start at the position.

White is also open to trying freshman Eric Hester at the point guard position as well.

With the center position John Egbunu, who is coming off of surgery due to a torn ligament in his thumb will most likely start as center.

Depending on production, White will put sophomore Kevarrius Hayes into the lineup for center as well. Hayes definitely used his opportunity when starting as center when Egbunu was out for the season during the N.I.T. Hayes dropped 14 points to help the Gators win at Ohio State last season and added 14 points when the Gators faced George Washington University as well during the tournament.

Coach White has been impressed with practices recently. White has praised several players who are shooting well, especially from the 3 point position and says that his guys are shooting better than they were a year ago. Allen, who started all but two games last season and finished second to senior Dorian Finney-Smith last season in scoring. White has also mentioned Devin Robinson who is coming off of surgery for a stress fracture in his foot for shooting the ball very well, compared to the last season.

Forward Justin Leon who led the team in three-pointers last season, was another player White said was shooting well.

If you’re wondering where senior point guard Kasey Hill is, he was not practicing Tuesday and White says that he will not play on Wednesday’s game. Hill has been having some recent hamstring soreness and the training staff wants to hold Hill out for this one.

Eric Hester was mentioned earlier for a chance at playing as point guard for this game. Hester however wasn’t at the previous scrimmage due to a knee issue.

Dontay Bassett is out for the season and is redshirting due to a stress fracture in his right foot and it will require surgery.

Previous NBA Preview: Magic and Heat Kickoff Season in Orlando
Next Cubs Rely On Jake Arrieta To Even Up World Series 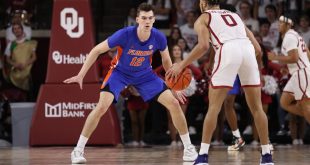 For Florida men’s basketball, the journey to SEC play has been delayed and riddled with …