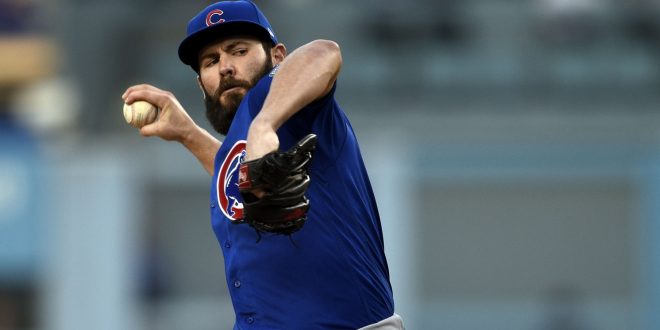 Cubs Rely On Jake Arrieta To Even Up World Series

The Indians notched a Game 1 World Series win against Chicago and the Cavaliers received their championship rings. Suffice to say that the evening of Oct.25 in Cleveland was sublime.

But despite a convincing Game 1 victory for Cleveland, it’d be unwise to start doubting the Cubs, the team expected to win it all. While the Tribe bested Jon Lester, tonight they face Jake Arrieta. The Indians counter with Trevor Bauer, a league-average pitcher who hasn’t pitched since Oct.17 because of a finger laceration. According to Baseball Prospectus, the Cubs have a 64 percent chance to win tonight’s game. Last night, Indians were 51 percent favorites.

Arrieta is easily the best starting pitcher in tonight’s game, but he hasn’t shown the same dominance that won him the 2015 Cy Young Award. The Giants and Dodgers tagged him for six runs on 11 innings in two starts this postseason. But his teammates are counting on him to make sure they head back to Wrigley with an evened up series. The right-hander last faced the Indians in 2015 where he went 5 innings and surrendered four runs in a loss.

Wasnt able to locate my fastball the way I wanted to & it cost us. I know @JArrieta34 is gonna pick me up & shove it tonight! #NVRQT #LetsGo

The postseason triumphs of Cleveland relief pitcher and Gainesville native Andrew Miller are well-documented. After pitching two more scoreless innings in Game 1, he’s up to 13 2/3 innings, seven hits, four walks and a whopping 24 strikeouts. But Indians manager Terry Francona’s secret weapon may at best be limited to one or two batters today after 46 pitches last night. It’s the most pitches he’s ever thrown in a relief appearance in the last five years. His 218 pitches in seven appearances this postseason are more than any month in 2016. The ALCS MVP won’t be as impactful as last night, which is a big bonus for the Cubs and their left-handed heavy lineup. Francona was non-committal on using him.

On Andrew Miller: Last pitcher to throw 46+ pitches in World Series game and pitch the next day was Francisco Rodriguez in Game 6-7 of '02.

Much of the Cubs’ narrative this season is wrapped up in myths and lore. The fan base considers goats and Steve Bartman as much of  an obstacle as Miller and Corey Kluber. But if the team is to win it all, they’ll need to also overcome a Game 1 loss. Each of the last 14 home teams to win the opening game of the World Series has hoisted the trophy. Seventeen of the last 19 winners of Game 1 have won it all.

While these two teams didn’t face each other in the 2016 regular season, several batters on each side are familiar with the opposing pitchers. Eight Cleveland batters are 11-for-44 (.250 AVG) with two home runs and five stolen bases against Arrieta. Eight Cubs are 5-for-29 (.172) with no runs batted in against Bauer.