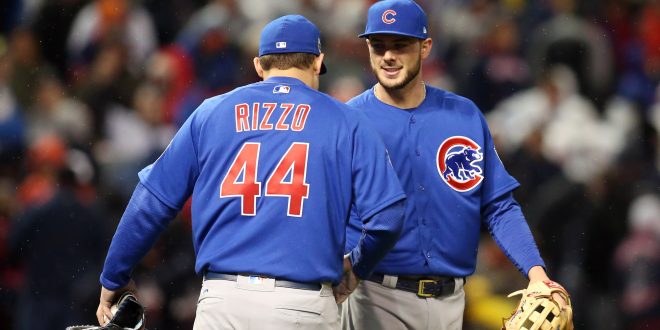 The Chicago Cubs, who did not start the World Series with home-field advantage even thought they won nine more games then the Cleveland Indians, take Game 2 by a score of 5-1 to even the series at 1-1.

The Cubs were able to jump out to an early lead against Trevor Bauer in the top of the first on an RBI double by Anthony Rizzo that Kris Bryant scored. The Cubs starter Jake Arrieta struggled during the first two innings, he then began to rely on his fastball that got him to enter the sixth inning without allowing a hit.

Arrieta left the game with two outs in the sixth for lefty Mike Montgomery, who stuck out four batters over two innings before being replaced by closer Aroldis Chapman—who came in on for a four-out save.

.@JArrieta34 settled in quickly – and it was #filthy.
#WorldSeries pres. by @TMobile https://t.co/kor5moYLm5

Bauer’s performance was the worst for the Indians, who were reluctant to use relief ace Andrew Miller after a 46-pitch outing Tuesday night. Cleveland is planning on pitching Corey Kluber, who was the Game 1 hero for the Indians, for Game 4.

Cleveland will need another starter to step up and help them win a game against the Cubs who have home-field advantage for the next three games.

Game 3 will be Friday with first pitching set to begin at 8:08 p.m. in Wrigley Field. You can watch the game on FOX.