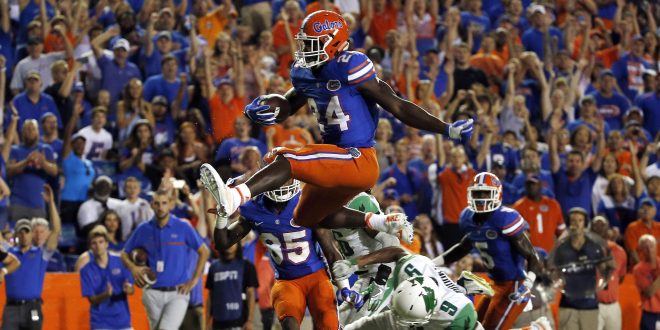 RB Mark Thompson Not Traveling with Team to Jacksonville

Gator running back Mark Thompson did not travel with the team to Jacksonville for Saturday’s game against the Georgia Bulldogs after being cited for marijuana possession.

Mark Thompson will not be making the trip to Jacksonville due to some choices and decisions he's made. #Gators

Thompson was pulled over early Thursday after he ran a stop sign near campus. The officer said he smelled marijuana in the car. He performed a search and found Thompson in possession of fewer than 20 grams of the substance.

The officer gave Thompson a notice to appear for the misdemeanor violation. He also was cited for failure to stop and failure to provide proof of insurance.

The redshirt-junior running back ranks third on the team with 262 rushing yards and two touchdowns. Thompson had his best game as a Gator against North Texas. He ran for 85 yards on 11 carries and a score. Jordan Scarlett, Lamical Perine and Jordan Cronkrite are expected to get the bulk of the carries during the matchup with Georgia on Saturday.