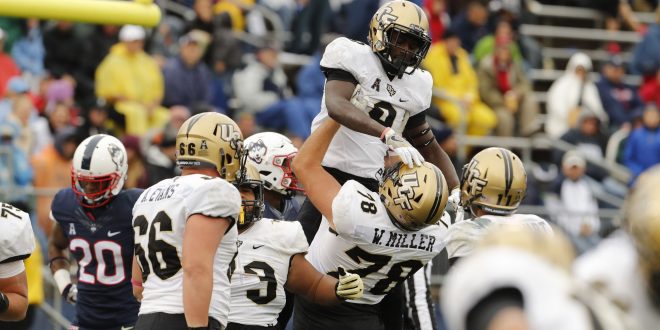 The UCF Knights will take on the Houston Cougars in an AAC showdown matchup this Saturday.

Knights Back on Track?

“The past is like using your rear-view mirror, it’s good to glance back and see how far you’ve come, but if you stare too long you’ll miss what’s right in front of you.”

That might just be what the UCF Knights (4-3) are thinking during this 2016 season. Rewind to a mortifying 2015 season when they were 0-12. Last year, after UCF’s 59–10 homecoming game defeat by Houston, George O’Leary resigned as head football coach. But lets look what’s right in front of them, the Houston Cougars (6-2) this Saturday.

Knights new head coach Scott Frost has lead this team to a 4-3 record. Frost’s team has also shown they have a lot of fight in them. Last week they showed out with a come-from-behind win on the road over UConn, 24-16. What’s ahead? The possibility of being the American Athletic Conference East division champs.

This Saturday the UCF Knights will surely have a lot of playing power in them. They are steadily regaining their place in the AAC. After an embarrassing Homecoming loss to Temple 26-25, they seem refocused once again in this unpredictable conference. Due to a number of injuries, Coach Frost had to hold open tryouts to try and replenish his team’s depth, although the help will not be there this Saturday.

Knight freshman quarterback McKenzie Milton didn’t play until the third game of the season, but he has already recorded impressive numbers. Milton has 960 passing yards, 8 TD’s and 2 INT. Last week he had a career-high 317 yards and three TD’s, completing 29 of 45 passes. Senior Dontravious Wilson has rushed for 371 yards and seven TD’s, while Tre’Quan Smith leads the team with 23 catches for 360 yards and three TD’s.

The Houston Cougars started this season, unlike the Knights, with a lot of smoke. Head coach Tom Herman is in his second season with the program and turning heads. Herman has brought Houston into the national spotlight. They handed No. 3 Oklahoma a loss in their season opener, which kept them in the Top 10 for most of the season. Houston has suffered two losses on the season, including the surprise 38-16 loss to SMU.

Houston senior quarterback Greg Ward Jr. ranks No.14 in the nation in passing yards with 2,179 yards. He has 417 rushing yards and six rushing TD’s as well. He is essentially their offense.

Ward Jr. gets help from three receivers, Linell Boner, Chance Allen, and Steven Dunbar. However, if Ward Jr. plans to run the ball on UCF, he’ll have to be at his best as the Knights are only giving up an average of 133 yards per game. The Knights also rank No.8 in third down defense. So if the Cougars are going to win this game, they are going to have keep Ward Jr. busy and away from UCF defensive lineman Tony Guerad. Guerad leads the defense with 25 tackles, 5.5 tackles for loss and 2.5 sacks.

When the clock strikes noon on Saturday these two teams will have a lot to play for on ESPNU.

September 8, 1990, Steve Spurrier took the field as UF's head coach for the first time, and led the Florida Gators to a win against Oklahoma State. Gator Nation stood up stronger that day, and I apparently took my first steps to stand with them. Since that day, the most memorable moments were defined by sporting events with my family. I was a competitive gymnast, cheerleader, and dancer. After career ending injuries, I decided the next best thing would be to pursue sports journalism. Sports have a way of brining people together from all over the world. I enjoy learning those stories that are universal for so many people.
@KadyMarlowe
Previous RB Mark Thompson Not Traveling with Team to Jacksonville
Next CFB Preview: #9 Texas A&M vs. New Mexico State