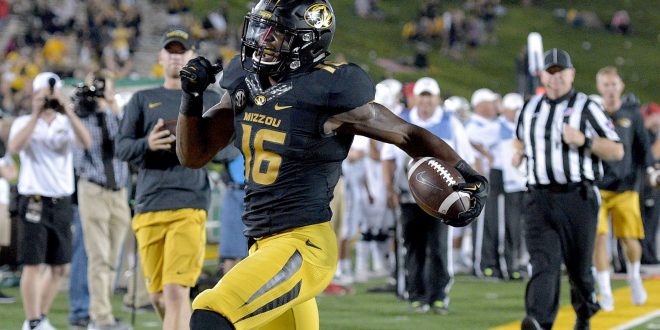 The Kentucky Wildcats will take a trip to Columbia to take on the Missouri Tigers this Saturday in an SEC East matchup.

The Wildcats are coming off a 40-38 win last week. Kicker Austin MacGinnis kicked a game-winning field goal as the clock ran out.

The Wildcats are 4-3 (3-2 in the SEC) and have been rolling ever since Stephen Johnson took over the quarterback position. Since Johnson became the starting quarterback, the Wildcats are 4-1, averaging nearly 30 points per game. Kentucky Wildcats head coach Bob Stoops says Johnson is getting better and better each week.

Along with Johnson is the dynamic duo of Stanley “Boom” Williams and Freshman Benjamin Snell Jr. The two running backs have run for a combined 1,108 yards and eight touchdowns.

Mizzou Tigers head coach Barry Odom says they will have their hands full with Kentucky’s offense.

Mizzou has a strong rushing attack of their own. Tigers running back Damarea Crockett has 83 carries, 546 rushing yards, and seven touchdowns. Stoops describes Crockett as being big and explosive.

The Tigers were upset by Middle Tennessee 51-45 last Saturday. If Mizzou is going to get their first SEC win of the year, then Crockett will be a big key for the Tigers offense.

This will likely be a high-scoring game due to both defenses struggling for the majority of the season. The Wildcats have taken the time preparing to stop the Tigers’ offense though. Stoops admitted that Josh Heupal’s offense (Mizzou Tigers Offensive Coordinator) is different then other offenses in the SEC.

Both the Wildcats and the Tigers defenses will have a tall task ahead of them in this game. The potential offensive shootout will kick off at noon and can be seen on the SEC Network.

Previous CFB Preview: Notre Dame and Canes Both Try to Get Back on Track
Next CFB Preview: Mississippi State Hosts Samford