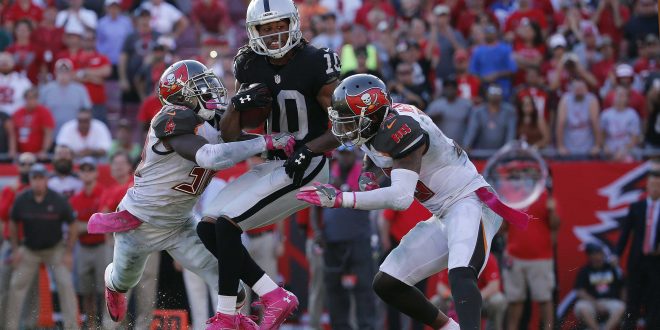 Bucs Unable to Hold Off Carr and The Raiders

The Oakland Raiders set an NFL record against the Tampa Bay Buccaneers in penalties (23) for 200 yards. Despite the penalties, the Raiders defeated the Bucs in overtime 30-24.

Full breakdown of the Raiders' record 23 penalties (they also had 3 declined and 1 offset) pic.twitter.com/BahyvQIJI6

What helped the Raiders overcome the penalties was a stellar performance from quarterback Derek Carr—who threw for 513 yards and four touchdowns.

Carr went 40-59 and kept connecting to keep the offense on the field for 44:12 minutes compared to the Bucs’ 29:03 minutes. Buccaneers head coach Dirk Cotter mentions that the defense on the field too long didn’t help.

The Raiders time of possession led to the amount of total yards they put up against the Bucs totaling 626 yards while Tampa Bay only had 270 yards. With Tampa Bay’s offense being held to less than half of the total yards Oakland put up, wide receiver Mike Evans was held to only four catches for 50 Yards. Koetter says Evans needs to get the ball more. From every Bucs win, Evans has had at least 90 yards.

Bucs quarterback Jamies Winston targeted Evans 11 times but couldn’t connect for the majority. Winston threw for 180 yards and two touchdowns and connected on half of his 32 attempts.

Like Evans’ productivity contributing to wins, Winston has thrown for over 200 yards in every Bucs win. Despite being short by 20 yards, more connections could have led to more opportunities to score. In his defense, the defense wouldn’t stop Oakland much, keeping Winston on the sideline.

Now with this loss behind them, the Bucs look to turn things around quickly for an NFC South showdown on Thursday night against the Falcons in Atlanta. Tampa Bay opened the season with a win against Atlanta where Winston and Evans both shined. Much like every other win, Tampa Bay will most likely need Winston and Evans to carry the team.

Atlanta is coming off a 33-32 victory against Green Bay.

@andresjimenezj4
Previous Did You See The Reporter Get Trucked At Florida-Georgia? That Was Me!
Next Dak Prescott Pushes Cowboys to OT Win Over Eagles