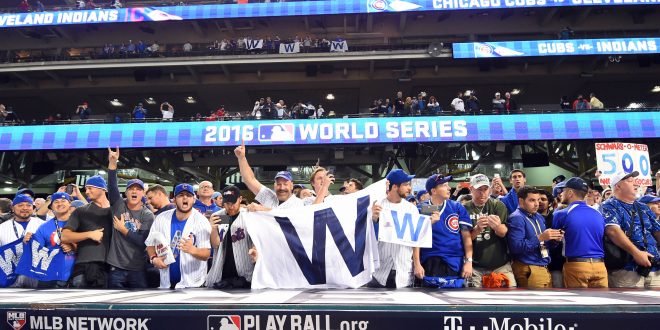 Game 7 of the World Series will be nothing less than nerve-wracking for the Chicago Cubs and the Cleveland Indians. A 108-year dry spell could come to an end tonight for one team, while a 68 year drought could end for the other.

The odds were in the Indians’ favor after Game 4.  They led the series 3-1 with chances to win it all in Games 5 & 6.  The Cubs came firing back in those two games, holding on to extend the series to Game 7.  The World Series has only gone to a Game 7 twice in the last decade.  The Cubs are riding a lot of momentum with their comeback wins to give themselves a fighting chance at the title after the odds were well in Cleveland’s favor.

Which Drought Will End?

The Indians won the World Series twice, the first in 1920 and the most recent in 1948.  Although the streak is not nearly as long as their opponents’, Cleveland still hasn’t held the trophy in 68 years.  If the Indians win the World Series, Cleveland would have the 2016 NBA Championship and the 2016 World Series crown.  The last year a city held up two of the major big 4 sports championships in the same year was in 2009.  That year, the Pittsburgh Penguins won the Stanley Cup and the Steelers won the Super Bowl.

Cleveland pitcher Corey Kluber  is the likely favorite heading into the game, as he is 2-0 with a 0.75 ERA.  Kluber’s other appearances this series came in the Indian’s Game 1 & Game 4 wins. So far this series,  the 2014 Al Cy Young Award Winner has struck out 15 and walked one in 12 innings.

Relief pitchers Bryan Shaw, Andrew Miller, and Cody Allen are a dynamic trio when they all appear in a game together.  So far this postseason, the Indians have gone 5-0 (and they also went 11-0 in the regular season) when they have all pitched in the same game.  Miller seems to have become the star of the three, after he clinched the ALCS for Cleveland and was awarded the series MVP.  He’s compiled 21 strikeouts in the postseason.

Two-time All-Star Kris Bryant lit up the field in Games 5 & 6.  The third baseman hit a solo homer in the fourth to get his team going in Game 5.  He

also got Chicago on the board early in Game 6 with a two-out, first inning bomb to left field.  Bryant later singled in the fifth, seventh and ninth innings.  He was 4-for-5 with two runs scored in Cubs’ 9-3 win.

Chicago pitcher Kyle Hendricks led the MLB with a 2.13 ERA this season.  In the World Series, the right-hander has pitched 4 1/3 scoreless innings which resulted in a no-decision in Game 3.  His biggest performance to date arguably came in Game 6 of the NLCS, to clinch the first pennant for the Cubs since 1945.

The Chicago Cubs won an MLB-best 103 regular season games in 2016.  The Indians had a two-game lead on the Cubs until they closed the gap in Games 5 and 6.  The Indians have not lost 3 games in a row this year, and they don’t plan on it in Game 7.  Both teams know they have a lot on the line, so they will need to stay mentally tough and play their hearts out.

Game 7 in Cleveland is sure to be a whirlwind of emotions for fans and teams alike.  The Cubs have a chance to end a 108-year gap without a World Series win, and the Indians will have the chance to bring the trophy back to Cleveland for the first time since 1948.

You can find radio coverage on ESPN Gainesville 95.3 FM beginning at 7 p.m., and TV coverage will begin at 8 p.m. on FOX.