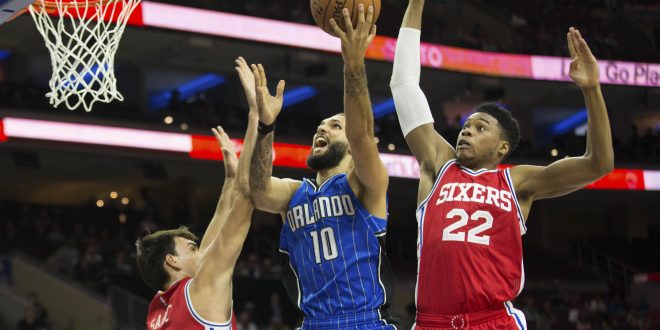 Magic Comeback Against 76ers to Grab First Win of Season

The Orlando Magic beat the Philadelphia 76ers 103-101 Tuesday night, a major comeback victory, to record its first win this season. The Magic have been searching for their defense all season, which they found in the fourth quarter in a nail bitting finish.

The Sixers started off with a 10-0 run over the Magic, then blitzed again in the second quarter to build a 17- point lead after the Magic fought back. After halftime, the Magic put the pedal to the medal and started to play at a high level defensively. This came with an 18- point comeback in the second half with a 41-point third quarter. In the fourth quarter, the defense truly showed when the Magic shutout the Sixers offense. With 5.7 seconds left to go, the score was tied 101-101. Serge Ibaka made the game winning foul shots which gave the Magic its first season win, after losing its first three games.

Serge Ibaka, with 1.4 seconds left in the game, he was preparing for a layup or drunk when Philadelphia’s T.J McConnell fouled him. Officials whistled McConnell a Flagrant-1 foul, a foul that left Ibaka with pain in his shoulder blade. Ibaka knew he had to make the free throws in order for the Magic to win the game. Even through the pain, Ibaka sank in both of his free throws. For the night, Ibaka tallied four rebounds and 21 points.

Other top performances for the Magic included Evan Fournier with 17 points and five assists, Nikola Vucevic with a game-high of 24 points and 14 rebounds, and Elfrid Payton with 18 points and 10 assists.

Head Coach of the Magic, Frank Vogel is proud of the team’s performance for this game, especially for the defense for stepping it up. The team knew they didn’t play well enough in the first half but the team remained confident. Vogel said the team did whatever it took to get a win.

The Magic take on the 2-3 Sacramento Kings at home on Thursday at 7 p.m.

Hello my name is Kaitlin Alexander, a passionate story teller and lover of sports. Fun facts about me: I am a world traveler, interviewed all three UF Heisman Trophy winners, and a former intern of Bleacher Report. Follow me on Twitter: KalexanderUF
@KalexanderUF
Previous Heat Tally First Home Win
Next Preview: World Series Game 7