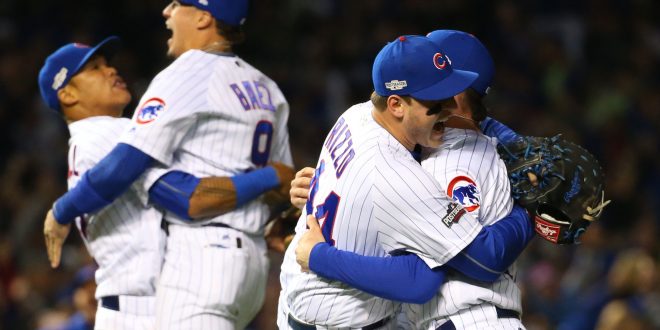 The Chicago Cubs are the World Series Champions.

The Cubs overcame a 3-1 game deficit and held on for dear life in Game 7 of the World Series, topping the Cleveland Indians 8-7. The Cubs handed the longest World Series drought in baseball to the Indians and said goodbye to the Billy Goat, black-cat, and Bartman curses for good.

Perhaps it was fate, because on what is deemed National Stress Awareness Day, the Cubs erased 108 years of agonizing stress for Chicago fans everywhere, but not before taking fans through arguably the most action-packed, emotional roller coaster of a Game 7 that ever took place.

The Indians evened things up in the bottom half of the third with a single to right field from Carlos Santana to plate Coco Crisp. It wouldn’t be long however, before 23-year old Javier Baez and David Ross, in his last game before retirement, both went deep for the Cubs. The lead swelled to 6-3 after the sixth inning.

Let’s rewind for a second. The Cubs didn’t want to win this the easy way, as they managed to blow the largest lead in Game 7 since 1924. And how would they do it?

Up 5-1 in the bottom half of the 5th, Jon Lester came in for his first relief in nine years, one wild-pitch and two runs later and the game narrowed to 5-3.

In the bottom of the 8th, Cubs call on closer Chapman who comes into the game and does two things he hadn’t done in his Chicago career. He gave up hits to the first three batters and surrendered his first home run. With two outs and two strikes, the Indians’ Rajai Davis sent a rocket soaring to left field, sending Progressive Field into a frenzy. It became the latest game-tying home rum in a Game 7 ever in the history of the World Series.

And just when a crowd of 38,104 fans thought they had seen it all, it was just beginning.

If there wasn’t a better way to foreshadow the end of a drought, rain began to fall in Cleveland. The umpires briefly paused the game, perhaps a history-saving rain delay for the Cubs.

Play resumed in the top of the 10th, as Kyle Schwarber sent his third hit of the game into right field, where he was replaced by pinch runner Almora. Almora put himself into scoring position with a heads up tag up on a deep fly ball. Cleveland then intentionally walked Anthony Rizzo to pitch to later MVP Ben Zobrist.

With two men on, and a 1-2 count, Zobrist made them pay. He found contact on a 96-mph Brain Shaw cutter, sending it just beyond the reach of third baseman Jose Ramirez. Almora came around the score and the Cubs were back on top. But this inning wasn’t over.

The Indians loaded up the bags after intentionally walking Addison Russell. Montero then did something he hadn’t manage to do in nearly three weeks: Get a hit. His first hit of the postseason with an RBI single to give Chicago an 8-6 lead.

But remember the Cubs didn’t win this the easy way. In the bottom of the 10th, the Indians struck again. Brandon Guyer walked and Davis singled him home, closing in on the Cubs’ lead. But Michael Martinez could not keep the rally going. He chopped a ball to third baseman Kris Bryant, who fired it to Anthony Rizzo to begin the celebration.

The Chicago Cubs basked in the glory of what it felt like to call themselves the World Series Champions.

Unfortunately for the city of Cleveland, it would only see one championship this year. Maybe the sports world wasn’t quite ready to see a two-title town in a city that brought home their first National title in 52 years with the Cavaliers.

Previous The End of the Drought and the Beginning of a New Era: The Chicago Cubs are World Series Champions
Next Jeremy Foley’s First Few Days of Retirement